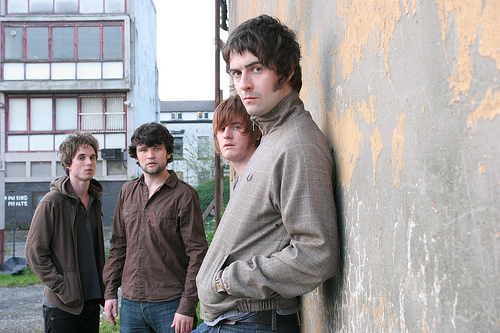 The Courteeners are a much-hyped act from Manchester, making serious inroads into the UK music scene. They turned up at the The Proud Galleries last night looking as if they had all just woken up after a 17 hour kip. The bed-head look is one that they seem to like and the fans certainly don’t mind it either. But whilst there is a generally laid-back ‘Gallagher on Valium’ aura surrounding the band, their tunes are anything but tired.

It’s easy to see why such good things are predicted for The Courteeners as they have an exciting and en-vogue sound. With the same sort of everyman lyrics as The Arctic Monkeys and a vocal style which, at times, reminds me of the excellent Jamie T It would be very surprising if these guys don’t succeed on a grand level. It’s perfect NME fodder and despite the obvious stylistic references, there is something unique about the music.

They don’t feel the need to be excessively loud in order to get their point across. There is a mild anarchy about the act but also a musical and vocal refinement. The power is in the song-writing and not in the PA. Add to this a mildly ‘Mod’ sound which echoes The Clash and The Futureheads , and we’ve got a really decent band on our hands.

And if fans maketh the band, then these guys won’t struggle. From the off, The Courteneers were treated like kings by a crowd that consisted largely of joyful Mancunians. Improbable as it seems, I actually got the feeling that the audience wasn’t comprised so much of displaced Mancs living in London, but of fans that had actually travelled the 250 miles from their birthplace just to have another experience with The Courteeners. I’ve seen many gigs where the vocalist is drowned out for a couple of songs by an audience reciting the lyrics at the top of their voices, but this was something else. It’s no exaggeration to say that these die-hard supporters sang every lyric from every song in unison, whilst moshing around like there was no tomorrow (and with huge amounts of alcohol being consumed there probably was no tomorrow for some of them). Even when the guys tuned up between songs the crowd refused to lie down and instead took the opportunity to sing ‘Manchesterrrr, Manchesterrrr, Manchesterrrr’. It was quite amazing, but clear to see that the youth of Manchester are embracing The Courteeners in the same way as Sheffield took ownership of The Artics. It’s like this band is becoming the chosen voice of a whole region of England. You get the feeling that each audience member would remortgage their house, or do whatever necessary, to put these guys where they belong, at the top of the UK Music pile.

On this form it won’t be long before The Courteeners are driving Bentleys.