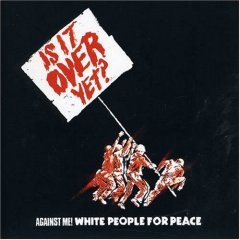 Against Me – White People For Peace

Judging by the immediate title of this song, you would be right in thinking that this is a band with something to say.

Well you will be left in little doubt after lyrics such as ‘Protest Songs in response to military aggression’ But Florida’s Against Me don’t just have something to say, but they have presented a very audible way of saying it. Lightening fast drumming mixes with heavy electric guitars and a very catchy chorus to come up with highly addictive song.

After three successful albums released on Indie labels, they now make their major-label debut with ‘New Wave’, which this single is lifted from, and seem ready for the big time.