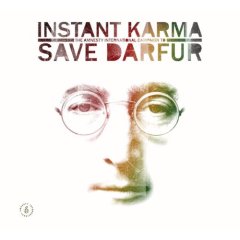 Amnesty International have assembled a John Lennon covers album bursting at the seams with some of the most recognisable names in the music business to raise awareness of The Campaign to Save Dafrur. Darfur in Sudan is in the grips of a nightmare. The inconceivable suffering includes the rape and deaths of thousands of civilians at the hands of the ‘Janjawad’ militias.

The double album boasts the talents of U2, REM, Green Day, Christina Aguilera, Avril Lavigne and Snow Patrol to name but a few. U2 take on title track ‘Instant Karma’ which doesn’t stray too far from the original. REM’s version of ‘#9 Dream’ is a little musically inept but Michael Stipe’s lyrics stir the appropriate emotions as always. Christina Aguilera drags out a cover of ‘Mother’ which starts promisingly but by the end leaves you scrambling for the Fast forward button. Likewise, Lenny Kravitz’ Cold Turkey’ begins to grate on you before too long, although many would point out that that was the intention of the original. You would think that The Cure would be the perfect band to cover ‘Love’, although where John Lennon’s offering pulls on the heart strings, this version strays too far from the original with an echo machine in overdrive.
Avril Lavigne shows her versatility with a beautiful version of ‘Imagine‘, although naturally its not a patch on Mr. Lennon’s classic.

Where the big stars sometimes fall short on albums such as this, its often the little-known’s who prevail. ‘Nobody Told Me’ by Big & Rich, and ‘Mind Games’ by Eskimo Joe, keep very much to the blueprint whilst adding their own unique twist.
Green Day’s recent single release ‘Working Class Hero’ is a highlight of the album and it even fades out with John Lennon’s spoken word. Jack Johnson’s attempt at ‘Imagine’ is easy on the ear lyrically but the guitar laden track loses the mass appeal of the Piano heavy original.

The double album continues with a who’s who of the music industry, with acts such as Snow Patrol, The Postal Service and The Flaming lips lending their voices, while the album concludes with a heavenly version of ‘Real Love’ by Regina Spektor.
With a double CD comprising 24 tracks you are left with a lot of material that will get little of your airplay. However there are enough high points to keep you interested and more importantly, its all for a good cause.