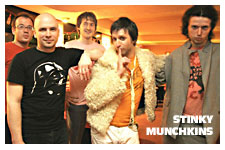 Coming down the same art school route as the likes of Pulp and equipped with Klaxons-esque pointy writing on the CD sleeve, the curiously named Stinky Munchkins offer plenty of promise.

Unsurprisingly, their sound is difficult to pinpoint, falling somewhere between uber-cool New Yorkers The Rapture and eccentric Aussies The Avalanches, but with noticeable influences from what the Glaswegians describe as ‘Misguided eighties electro experiments by otherwise reputable seventies rock stars.’ Both Release the Lions and B-side Bad Timing treat occasional glimpses of rock melody like a ‘where’s Wally’ within the crowded fairground of electronica and experimentation, resulting in an offering evocative of The Clash’s underappreciated denoument Cut The Crap. The distinctive quartet are definitely ones to watch.