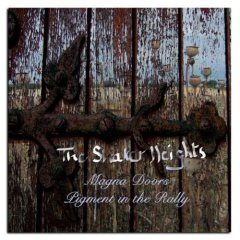 The Shaker Heights – Magana Doors/Pigment in the Rally

Magna Doors is the name of the LP that these two tracks were taken from. And if it’s as good as these songs suggest it must, surely, be worth buying into Aylesbury’s The Shaker Heights (TSH). That’s if you’re getting sick and tired of hearing the Keane LP! What TSH bring to their sound to set them apart from Keane is their tendency to drift toward Doves when they get going and rock out. So it’s not all mind numbingly mushy drivel!

‘Magna Doors’, the title track, is an open, accessible song that draws you in for a deservedly closer listen. And that’s a good thing because as the track comes to a close, you realise that it’s actually dragged on a bit toward the end, losing most of its initial, impact and its mood that it’s honestly sublime substance provides. The opening vocals hint at a sentimentality captured by the likes of Godley and Crème or Hall and Oates before fining their own identity throughout the song.

‘Pigment in the Rally’ worryingly opens sounding like ‘Kiss Me’ by Sixpence None the Richer. Don’t panic!! It only last for a few seconds before the drive and urgency are into overdrive. It’s like Richard Ashcroft has sacrificed some of his vocal strength for some musical importance, veering away from his all too frequently lacklustre sound. The music here leaves the admittedly improved vocals behind, wondering what could’ve been if Vincent Coole’s singing (and guitarist) managed to match the intensity and epic scale of Andy Browns (bass), Emily Coole’s (keyboard/harmonica/backing vocals) and Edd’s (drums/backing vocals) accompaniment.

All in all, this is great stuff that should develop and flourish into something, dare I say, important. And the artwork featured here as it is on their website, is both stunning and clever. Depicting what I suspect might be opium poppies in a field, transposing the image within the wooden grain of a rustic country cottage gate. Splendid stuff!