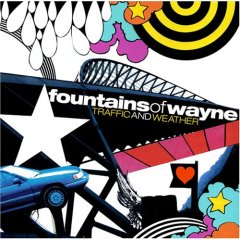 Fountains of Wayne – Traffic and Weather

Eleven years on from Fountains of Wayne (FOW) releasing their mainly ignored self titled debut LP, they have this, their new, fourth LP Traffic and Weather. Over the last decade they’ve disbanded to produce and write with the likes of Gordon Raphael and David Mead, tongue in cheek side projects like Gay Potatoes and The Astrojet and even helped out with the soundtrack to Josie and the Pussycats! Their fans include Stephen King and Elton John. So what are they knocking out these days that they feel might be worth our attention?

Fourteen bewildering tracks that touch on the instantly recognisable sounds of at least twelve (my last count) bands over its mesmerising forty eight minute duration is what’s in store. A sonic spectrum spanning The Carpenters to Green day and The Beach Boys to The Dandy Warhols with no discernable FOW central focal point to be found. FOW have forgotten to define their own identity and in doing so, failed to create any truly memorable tracks. The title track itself is awash with the sounds of Garbage, Stereo MCs and Inspiral Carpets, typical of any of the albums counterparts. The engaging ‘life outside your window’ lyrics are about as close as we get to a FOW constant, but each spell of splendour is smothered under the storm of such a singular and segregated set of songs. It’s a shame really because there are at least a handful of predictably structured but nonetheless great tracks to be found. The titles hint at the quirky themes and clever schemes buried within i.e. ’92 Subaru’, ‘Revolving Dora’ and ‘Planet of Weed’.

Ultimately, FOW have created an album with too many distractions that not only prevents it from fulfilling its true potential but prevents you from absorbing any of its finer, magic moments.