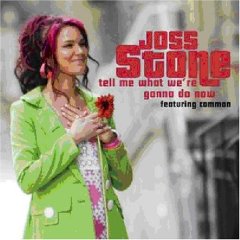 I remember when Joss Stone (JS) first came to our attention with a debut LP of vastly varied cover versions, notably covering ‘Fell in Love with a Girl’ by The White Stripes. As well as her three top twenty LPs and ten singles, she’s starred in the barely forgivable movie Eragon (not as a dragon, as a witch!), won both serious and ludicrous awards all over the place and contributed to an array of projects with many a superstar I can’t be bothered mentioning! Now we find the formerly shy sixteen year old songstress who transformed herself into the twenty year old sophisticate she’s become, releasing another single, dragging Common on board to help out.

Fans of Flaming Lips might be surprised to hear the music on this track. Strongly resemblant of ‘Fight Test’, it really does make your ears prick up! And when the overlapping melody of Bob Marley’s ‘Three Little Birds’ joins in, it really does make you stop and listen. And when JS starts her typical warbling, my MCS (Mariah Carey Syndrome) fears are realised. We all know that JS has got a stunning voice, granted it held greater appeal when she were only sixteen and none of us knew the limit of her potential. Four years on and it seems that she’s still knocking out the same diva derived ditties as she always has. It’s very nice and all but getting a little ‘old hat’.

This CD features not one, but two radio edits as well as an instrumental. The cynic in me knows that a radio edit featuring Common, one without Common and an instrumental is about all the record label could do to shift this to as wide a market as possible.

Besides covering various radio stations in this move, Common’s inclusion will appeal to the street kids and homies, his exclusion to all the aspiring divas and maybe even their mums. And I’m sure it’ll be a treat for all the fans at home that enjoy singing into their hairbrushes when they crank up the instrumental to neighbour annoying levels. Amidst all that, there are some underworked strings that go neglected. But there’s nothing surprising or spectacular about this release, either in the quality music or average vocals, I’m afraid! So I’ll finish with a quote from my good friend Forrest Gump! ‘That’s all I have to say about that’.