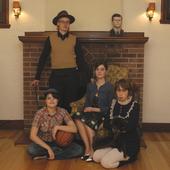 They have been together since late-2002. Formed in Montreal on New Year’s Eve, these four lovely ladies have already taken over the Australian charts and hearts and now they are here working to break it over here in Europe.

Presenting their limited edition UK single ‘The Truth About Cats And Dogs (Is That They Die)’, with B-side, ‘Wet’. Pony Up’s have a sweet simple and pop-driven sound. Their indie tunes are light and seemingly pretty non-offensive. You find the lyrics are drenched with old skool irony, echoing the indie-way that Pavement and Rilo Kiley have laid for the aspiring new kids on the block.

‘Wet’ is particularly shady and intense with a definite student band sound here; broody and slow-paced. Taken from their debut album, Make Love To The Judges With Your Eyes, out in September, the shoe-gazing indie-cult crowd will be sure to love this.