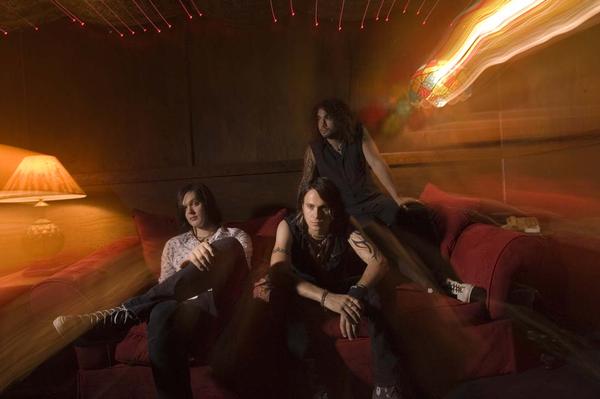 Having supported Rock super group Velvet Revolver, and currently getting their songs featured on the MTV2 top ten Rock chart, great things are expected from Rocks newest three piece Zico Chain. Hailing from Manchester, Brighton and London, Zico Chain are attacking the Uk Rock scene and picking up a loyal fan base along the way. Tonight Zico Chain were continuing their UK tour and were playing a heavily sold out Barfly in Camden.

The crowd was mostly made up of young Rock fans, although noticeably there were a few suits strolling about, clearly showing industry interest in the rock three piece. Tonight’s show would be split into three tight slots, each band were to play for 30 minutes, with a brief break between each set. Flood of Red graced the stage first and delivered a storming set to the London crowd. However it was Zico Chains other support, Ghost of a Thousand who particularly stood out. Their playing was tight and this hardcore band delivered an almost CD quality live sound to the London audience. Ghost of a Thousand are currently in the running in the Kerrang Awards section for best newcomers, so my tip is to watch out for these guys.

Zico Chain finally came on around 9:45; although technical problems delayed their start, as the sound man ran around the venue frantically. Zico Chain entered the stage and the crowd erupted, with chants of Zico. I was impressed to see they looked very much the all star rock band; they had a great look and really worked the London crowd. Their songs clearly influenced by the likes of Marilyn Manson, Moterhead, and the Pistols give them a dynamic sound. Hits such as the tongue in cheek” Rohypnol”, and “where would you rather be” really stood out and got the crowd going. Zico Chain’s mix of melodic vocals and a few clever Riffs really give strength to their songs. The only downside to the gig was 30 minutes just seemed far too short for the headline band, and I like others waited around for an encore which just didn’t happen. Additionally towards the end of the set, the stage was filled with crowd members, and the gig did seem to feel a little out of control. However Zico left us all wanting more, and it should be very interesting to see what the future brings for these talented 3 guys