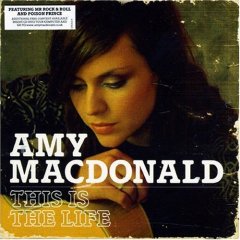 Amy MacDonald – This Is The Life

It must be hard to be a Scottish gal trying to establish some worth in your own right, in the music game. Distinct accents always draw comparison to any similar acts that have had and taken their chance before you. And the Celtic tinge heard here is no exception. Singing about the life you’ve seen, through your eyes and from your perspective, has admittedly been done numerously before too.

And so it’s no surprise to hear echoes of The Cranberries in the vocals, U2 in the guitar or Kirsty MacColl in Amy Macdonalds (AM) somewhat predictable, sentiment driven delivery. Shockingly, I have to tip my hat to AM and her LP ‘This is the Life’. I really didn’t anticipate my enjoyment of listening to an album made by a young, made for daytime TV songstress from Glasgow. Though she does hold bands like Travis, The Libertines and somehow Elton John, close to her blessed heart.

Amidst its qualities that range from conflicting 1st / 2nd person lyrics on a ‘Zombie’esque ‘Lets Start a Band’ and insipid ramblings like ‘A Wish For Something More’, tracks that escalate from soppy to smart, morose to charming and simple to simply sublime can all be found here. The opener ‘Mr. Rock ‘n’ Roll eventually kicks in and reveals its true ‘I Can Tell That We Are Gonna Be Friends’ by The White Stripes spirit.

Midway on ‘Barrowland Ballroom’ we find an abruptly, coolly closing combination of perfect percussion and brass blasting to accompany some of the sweetest honky-tonk piano I’ve heard since the Bernard Butler produced band Hopper and their performance peaking, piano enhanced track ‘Interference’.

The LP closes with what could be described as a forgivable and feminine version of Johnny Cash’s ‘Walk the Line’ Unlike the inexcusable secret track that follows, undoing all the magic weaved and unravelling the spells cast with its dominant bagpipe driven drone that eliminates most of what you’ve just heard. Definitely the worst choice for an LP closer ever!

Despite this, there’s still the impeccable clarity and confidence boosting production and mixing that layers and crafts each track to within an inch of its feisty life to convince you!
Along with my endorsement of course, which can be summed up with a confession of my admiration for AM and her as yet pure form pop. Let’s hope she doesn’t do an Avril or Britney!

For all info including that of her two previously released singles, visit-