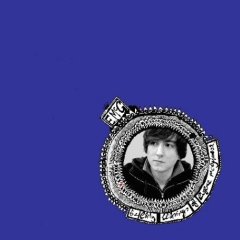 It’s nice to hear an album without someone singing in a “Cor Blimey, fackin’ ‘ell treacle” kind of way that EVERY musician from London does currently. And Eugene (note to parents: more Eugenes please) has a lovely voice. Well controlled, punctuated and doesn’t sound like a bulldog eating toffees.

His album, “The Early Learnings Of….” is pretty good generally. To start with, at least, it’s a bit Flaming Lips, but faster and with jumping-up-and-down vocal melodies that I’m have become quite a fan of. “A Child Lost In Tescos” is particularly good, with cheeky keyboards which sound like Punch of Punch and Judy fame. Lyrically, he tarts up the everyday with a bit of internal philosophy and poetic license. But it’s still relatable, even if the previous sentence wasn’t.

But, about half of the album sounds like what happens when all Eugene’s pop energy has burned away, and he’s having a sugar comedown. It gets pretty bleak, with the track “Madeline” making you feel just rubbish.

As I say, it’s pretty good, but not really consistent. Plus, 8 tracks at 27 minutes total? Someone’s been slacking a bit. More songs, less lamenting next time please Mr McGuinness