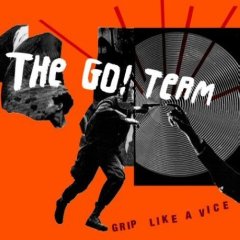 The Go Team return with Grip Like A Vice, the single that precedes their second album, due for release at the end of summer.

And this song radiates sunshine, much like the rest of the bands output, The Go Team and their worn and under-polished sound seem to generate a warmth, a glow that touches you and makes you want to smile, makes you want to dance. Anyone that witnessed their engaging and triumphant set on The Other Stage at this year’s drizzly and sodden Glastonbury can testify to that and is thankful for it.

The prepared blurb on the back of the promo promises ‘fly girl raps, electro and garage band noise workouts’ and anyone already familiar with The Go Team would expect nothing less, although it bears more than a passing resemblance to their break-through song Ladyflash this is nothing to be frowned upon, a clash of sounds that could be sourced from various decades yet belongs to none of them, not even our own, The Go Team are still doing things the way they want to and I’m sure no-one would have it any other way.