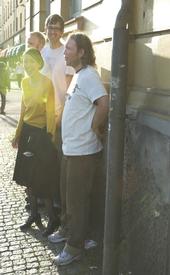 Hmm, the sounds of Sweden have been hard to argue with recently. We’ve had The Sounds, Jose Gonzalez, Ebb and Sounds Like Violence, but unfortunately with one single Little Dragon go some way to cocking up the chilly North’s golden streak.

‘Twice’ isn’t bad in a bearable-but-instantly-forgettable kind of way, its like any ultra mellow Morcheeba tune you care to mention. ‘Test’ though is just confused – is it trying to be funky? Cute? Good? Either way it fails and, by the sound of this double-a, so too will Little Dragon.