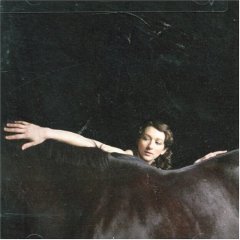 My Brightest Diamond – Bring Me The Workhorse

Wow where did this come from? It’s Joanna Newsome singing Nick Cave’s future classics and its captivating and brilliant throughout. Shara Worden’s got that weird and rare ability to make everything seem life-changingly important, you just need to know what she says next, and more importantly how she says it.

The whole album’s a winner but the last four or five in particular are amazing. It’s hard to believe this is a debut album, it just feels so worked on and honed but rather than meaning that it’s lost all its energy and power by being too polished, the opposite is true.

Worden’s voice is the key (think Joanna Newsome mixed up with Anthony and the Johnsons). She twists ‘Dragonfly’ away from a basic, simple tune about escaping into a dark and cautionary tale of fear. ‘Magic Rabbit’, ‘The Good & The Bad Guy’ and ‘Something of an End’ are equally great.

This is the kind of album that should be up for the Mercury Prize every year (or the Shortlist, seeing as she’s American), it’s not massively original but its powerful, addictive and, unlike so much music right now, stays with you long after track eleven ends.

On ‘Disappear’ she sings, “One day I may go for the longest walk, don’t be too shocked ‘cause I get tired of sneaky societies and combat boots.” So she’s already hinting she’s getting tired of music after just one album, well best to go out on top I guess.