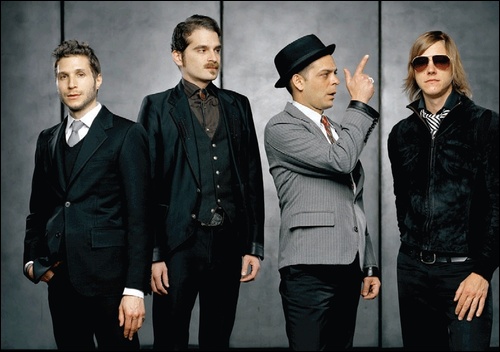 With their gig in Newcastle cancelled just 24 hours before, tension was rife amongst fans prior to Interpol’s scheduled appearance at Edinburgh’s Corn Exchange. However in the hours leading up to the gig, the news coming through was good, with bassist Carlos D seeming to have made a full recovery in time to satisfy his band’s concerned Scottish contingent. And didn’t we have every right to be worried? Let’s be honest. When was the last time a band as interesting, well dressed and gifted appeared in Scotland? (Did you catch Interpol at T In The Park?).

Predictably, the band make no scene when they finally shuffle onto the stage. While the majority of the crowd begin to lose the plot, Interpol, lead by frontman Paul Banks, give a wry, almost apologetic smile to the rapturous mob, before bringing some calm to proceedings with the first track from new album ‘Our Love To Admire’.
‘Pioneer To The Fall’ undoubtedly acts as a sedative with the crowd now gently swaying back and forth, hanging on to every word seductively uttered. The terms ‘melancholic’, ‘brooding’ and ‘style’ all immediately come racing to the forefront in the first few numbers of tonight’s set, promptly reminding us all why this is one of the few important bands on the planet.
The set is mixed between the driving anthems (Slow Hands), the gentle, gloomy tearjerkers (The New) and some of the other soon to be classics from the new record (Rest My Chemistry).
Cut in their characteristically immaculate black suites, Interpol keep crowd interaction to a minimum, preferring to do their talking through their now vast array of tunes.
‘No I In Threesome’ is the best song from the new album and when played live, is done so with that little bit extra drive and elegance.
“Through the storms and the light baby you stood by my side / There’s no I in threesome”, Banks proclaims before letting the other members once again, ‘up the volume’, not for the first time in a night when Interpol proved themselves to be the kings of ‘intellectual rock’.

Before the encore, we were treated to some more of the songs which now define Interpol – ‘Evil’ proved to be another standout in a set which had few flaws (No sign of PDA) and ‘NYC’ gave the crowd a chance to catch their breath before Banks and co returned to the stage, topping the evening off with ‘Obstacle’ and then ‘Stella Was A Driver And She’s Always Down’.
Interpol’s performance, unsurprisingly, wasn’t a merry quip – merely a statement of separation, detachment from all those ‘oh so’ familiar tags and comparisons. While other indie rock bands of today make a career out of blatantly copying others (Hi Editors!), Interpol stand alone, and tonight showed just how good they are. Brilliant. And then some…