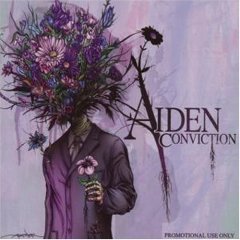 Following in the footsteps of From First to Last and HIM, Aiden have the goth aesthetic down to a T, acquiring a cult following from their 2004 debut release.

Conviction, their third attempt, is seemingly LostProphets inspired, one more notch for the bandwagon then; Emo to those of you unaware of the original meaning of the term (Christie Front Drive anyone?). New single, One Love starts as an ode to 30 Seconds to Mars, but crescents into early My Chemical Romance; a few years too late. She will Love you works on a similar vein; the abundance of references to the dichotomy of teenage love/pain would suggest an incessant desire for human affection; if a mass group hug was organised, would this mean so-called ‘emo’ bands wouldn’t make our fragile ears bleed further?

Fresh from the Taste of Chaos and Kerrang tours, Aiden are proof that originality isn’t necessarily the formula for success. Surprisingly, Conviction isn’t abysmal; Fans of The Academy is… and the Audition will find the album bearable but this is not a record likely to invigorate interest in a scene that is slowly dying from over-exposure, leaving its skin dispersed like a snake’s on the surface of Radio 1’s playlists.