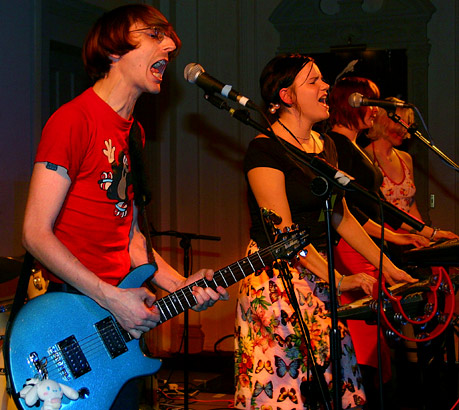 It’s a warm Thursday night in Nottingham. The chip shops are emptier than the lies I’m telling myself to distract me from the fact that I’m quite a bit jaded from my afternoon activities. But enough for now about me and my hazy journey to Junktion Seven, how did the Bearsuit gig go when I got there?

Three lovely guys plus three delicious girls equals six luscious bears. FACT! As the fantastic Deirdre’s swoon off stage, they thank and praise Bearsuit for, well, existing I think! The fifty strong crowd’s anticipation heightens as the moment for Bearsuit to play live draws near. Still, it’s very nice to see them up on stage, preparing themselves in the soundman’s prematurely provided silence. ‘That’s what you get for coming up here to position the setlists’ explains a clearly glee filled and excitable Lisa bear, who then finds time for a quick pre launch chat and a glass of fairly priced, ice tempered wine.

’Do you like the outfit’ she asks as my eyes struggle to stay inside their sockets. My momentary inability to reply is the only thing to distract her from the drool that’s surely hanging from my mouth. Donning a plastic looking gold belt to hold up her all attention grabbing red hot hot pants and knee high black socks that complement both her silver trainers and her perfectly proportioned thighs, it’s no wonder I didn’t notice her elegant and figure hugging black blouse until later. That and the fact that upon her head sat what appeared to be some kind of a marching band hat that cleverly complimented her matching shoulder patches. Now I see what she referred to earlier when she said ‘outfit’! When my brain finished processing all this information, I inadequately replied ‘yes, very effective’ and in embarrassment, turned my gaze to the stage and the rest of the band who too, were wearing the same marching band attire. Hey, what’s a guy with a pulse to do? The words ‘OK we’re ready’ eventually bring an end to the excruciating anticipation that’s wracking the stage nearing mums, dads and drunken monkeys in the place. I wish Lisa luck as she departs for the stage. Showtime!

Lisa instructs her compliant audience to contribute to the singing, to add extra punch to the ‘force’ in opening track ‘Jupiter Force’, before the Bearsuit machine powers up and rattles out it’s blistering set. Explosive and earsplitting electronica, serious hands on hips ahhh-ing and Jerk (Steve Martin stylee) dancing are just a few of the awesome spectacles served up throughout. Vocals reminiscent of both Salad and Whale are echoed here and there, piercing the delightful and Blue Note worthy Boredoms/Boo Radleys aural onslaught coming from a clearly psyched up and pleasure fuelled band. It’s like listening to an ice cream van crashing through the sunlit fathoms of a punk rock sonic sea!
And how joyous and life affirming it is to behold!

With so many highlights to choose from, I’m torn in two or three deciding which to share! The awesome yet underappreciated tambourine duet between Cerian and Jan bear, Lisa bears hypnotic Juliette Lewis likeness or her appreciative explanation of the topless lady boxing inspired ‘Foxy Boxer’ song. Maybe Rich bears bass string snapping incident and the keyboard music briefly used to fill the musical void. Perhaps the ironically timed appearance (during this silence) of the fabled dancing bear that apparently follows Bearsuit around to every gig they play! I can’t decide, really.

All I know is that anybody here tonight amidst this diminished crowd (owing to Bearsuits recent Nottingham shows I’m sure) will have trouble forgetting a truly unforgettable night. Hooray for the six bear wonder that is Bearsuit!