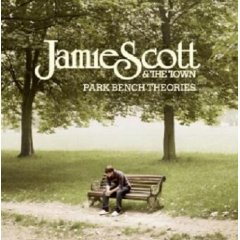 These days you can’t move for the influx of singer/songwriter types gracing the top 20 and lining major labels pockets left, right and centre. Polydor, having cashed in with James Morrison, appear to be duplicating the formula with a similar sounding, and predictably named addition to their family.

A couple of years ago the only singer/songwriters we had to endure were Badly Drawn Boy and Damien Rice, who now sound like Bob Dylan in comparison! Is it something with the name Jamie (Cullum, James Morrison/Blunt) that makes them wake up one day and think ‘Why don’t I become a singer/songwriter and bore the pants off people?’ If this doesn’t put you off, there is a hint of Simply Red in his melodies. Writing mediocre and bland songs is one thing, but Simply Red- come on! Scott’s lullabies will put you to sleep; based on the assumption, of course, that you’re not already dead. Walk away from the easy listening section! We blame James Blunt. Well at least this isn’t that bad. Thank heavens for small mercies.