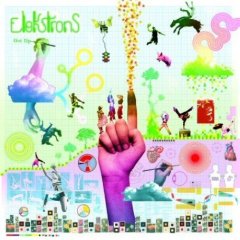 Already an underground smash after its limited release last summer, ‘Get Up’ gets a makeover from rapper ‘Soup’ who is none other than one fifth of LA hip hop big leaguers Jurassic 5.

The Radio Edit is an Indie / Dance crossover which has an extremely addictive back beat and ‘Soup’s’ lyrics fit in perfectly making it far and away the best version on this offering.

We are ‘treated’ to a further 3 edits of the song with the original album version, an instrumental and the ‘Herve Gets Down Remix’ which sounds like an accident on a building site – none of them come near the Radio edit.

The final piece of the jigsaw is ‘Joy’ which is 7½ minutes of nonsensical noise which you would do well to avoid.