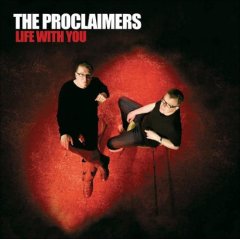 The Proclaimers – Life With You

A record breaking Comic relief single with Matt Lucas and Peter Kay, a musical based on their work and a massive UK tour that has oddly sold out in Scotland, what else can they come up with this year? Well, one thing is their new LP ‘Life with You’.

Recorded at Rockfield Studios, we have thirteen brand new tracks from Craig and Charlie Reid, AKA The Proclaimers. So what are they proclaiming now, other than them being Scots? Let’s take it one track at a time shall we?

‘Life with You’ – Kicks off with a typical Proclaimers love song to tune your mindset accordingly. Added depth is brought in with the peak defining brass work. OK then, next!

‘In Recognition’ – Here we find the twins having a pop at anti-royalists who eventually go on to accept honours from good old Lizzie herself. Clever lyrics and sweet orchestration add a sense of development and growth in their sound.

‘New Religion’ – Having a pop at people’s religion can be risky, but knowing no fear, on they go! They’re really having a go at fads that grow out of proportion and the people responsible for allowing, no, causing it to happen. Listing football and Star Wars as examples, surely all the self-confessed followers of the now widely recognised Jedi religion won’t be too pleased about that! I expect you’d get your head weighed in if you sat at the table with your ma, pa and six rugby playing brothers, proclaiming yourself to be a true believer in Jedi! As for the music, well, apart from the church organ at the beginning, there’s nothing extraordinary to report.

‘S-O-R-R-Y’ – echoes Rod Stewarts’ Your Song’ whilst having a pop at people mouthing off their opinions! Sound familiar? Sure it’s aimed at the press and its hypocritical war views, but is it really OK to mouth off about folk mouthing off? S-O-R-R-Y but it isn’t. It’s hypocritical isn’t it?

‘No One Left To Blame’ concerns the unfortunates out there who blame everybody else for their misfortunes. Fair enough when the blame isn’t justified of course! Some smooth vocals riding a pulsating bass do the song justice, compensating for the all too timid guitar track.

‘Here It Comes Again’ tackles the issue of gangster rap music and its commonplace blasphemy, slandering women, glorification of violence and the general acceptance of it. Of course that’s where freedom of speech etc comes in, the same freedom that’s being utilised here. So maybe someone, whether they’ve got a valid point or not, should stop whining like a couple of skank ho bitches!

‘Blood Lying on Snow’ is a song of lusting and wanting a lady and her lovely lady parts, as opposed to loving and winning the lady and the winning of her heart. Hey I’m a poet and didn’t even realise!

‘Harness the Pain’ is about using all your negativity as well as your positivity in being creative. Keep true to yourself and acknowledge the hard times as well as the good. I don’t believe this song is about all that, I think it’s about being ginger (something of which I’ve personally no opinion)!

‘The Long Haul’ is, they claim, a song about the avoidable mess the U.S has made for itself with its involvement in Iraq and its affairs. Come on! The U.S has been bombing that region of the world for how many inconsequential years? They always had it coming and now it has, they can’t see past their own world dominant arrogance to see any possibility of it being deserved. Yes I sympathise for their loss and I will when our time comes too (cheers Tony). See what you did? Now I’m getting my nose in!

‘The Lovers Face’ sounds like an amalgamation of the Dusty Springfield hit ‘Son of a Preacher Man’ and the Ray Davies penned ‘Days’, better known after the Kirsty MacColl cover. Boasting an unlikely R’n’B/country arrangement, it certainly is as refreshing as it is unexpected.

‘Whole Wide World’ is a Wreckless Eric cover. It revisits the sentiments of ‘I’m Gonna Be (500 miles)’. A guitar part that U2 could’ve spewed out in their early career supports the more devout lyrics, going beyond 500 miles to; yes you guessed it, the whole wide world.

‘Calendar on the Wall’ is a bit of a non starter, an admittedly simple song about wasting the day away. O…K then!

And so to summarise, this LP is as important as it is irrelevant. The fans will love it for its typical sound. The tracks that get airplay will be subconsciously absorbed by the toe tapping masses. Will it change lives? As with most music these days, a life changing LP is a rare beast and I’m still hunting it down.