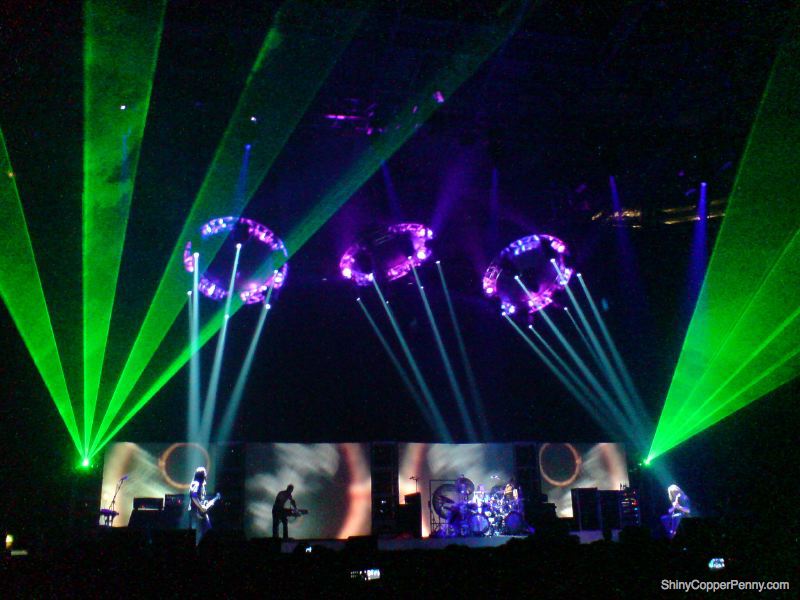 Old friends come back to visit, seventeen years since they formed in LA. A remarkable feat of longevity and a body of work of only four full-length studio albums, an average of one album every four years. The latest offering 10,000 days (2006) is still being broken in. Many are still exploring the depths of Lateralus (2001). It shows Tool are making music five years ahead of their time, fans and musical peers are still catching up.

The band usually only tour to promote a new album so it’s a little strange to see Tool back so soon after last November’s MEN show but never-the-less everybody jumps at the chance to pay the elevated ticket fee to see them. With this price comes certain expectations and although Tool live up to it easily the venues policy on smoking and moshing are strictly adhered to. We watch two smokers evicted and security moves in to the crowd in clusters whenever a moshpit breaks out. They may as well have left the chairs in for a more civilized affair like the last time we were here for the Lou Reed concert.

Tool are no longer a young band. We estimate Maynard must be almost 45, still sounding as fresh and powerful as he did on Opiate, apparently recovered from a throat infection which caused them to cancel a recent Austrian festival appearance. The band are still attracting excited young people hoping to experience one of the most glorious rock stories in history, stood perfectly still. The experience is more a spiritual one, and although not as challenging as the Lateralus tour which included eleven minute rendition of Reflection the set tonight covers the full range of Tool’s dynamic career. This is almost a recent best of. The customary two Aenima tracks Stinkfist and Forty-Six and 2 after opening with Jambi, into a selection of 10,000 Days and Lateralus tracks; Vicarious, Rosetta Stoned and Wings for Marie Pt. 2. They throw in Flood from Undertow as the oldest track and a first live hearing for many fans, before the set culminates in crowd favourite Aenema.

There are few bands able to maintain their integrity and live show standard over such a long period of time but that is what Tool are about; integrity, professionalism and longevity.

On the way out I notice a poster for Dillinger Escape Plan with Meshuggah. I don’t expect that to be such a placid affair.