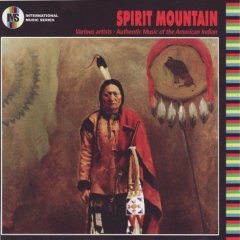 This album will probably not find its way into the collection of many music fans. An average trip to your local record store does not at any point usually include the thought ‘I may pick up some authentic music of the American Indian today’, to say that Spirit Mountain, the latest release from the Cooking Vinyl label in its International Music Series, is aimed at a niche market is quite a large understatement.

First impressions liken this to a soundtrack for Walt Disney’s Pocahontas, my knowledge of American Indians, their culture and their music is fairly non-existent bar anything I have seen in films or on telly. And that is why this release is an eye-opener for anyone that takes a little time to discover it, music should always be about discovery, whether it is a new band in a tiny venue or experiencing sounds of foreign cultures.

Most of this album is built around very basic instrumentation, drums, woodwind instruments, and voice, with a few outdoor sounds thrown in for extra authenticity, conjuring up a sense of a real campfire experience although guitars and pianos do creep into some of the tracks.

It is the tracks that feature spoken word that are the most intriguing, giving an insight into a different way of living and the stories and beliefs of another culture, the strong choral chanting of other songs is also interesting to hear although the rest of the album does disappointingly tend to veer off towards the realm of new age ambient chill out.