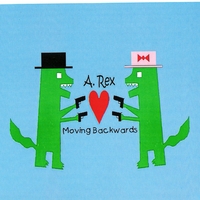 A band consisting of Andrew Espinola and Andrew Jones and featuring other rotating musicians with the name of Andrew, this sounds shit and could quite easily have gone horribly disastrous. Thank Christ it doesn’t.

There’s fuzzy, crackly vocals all over opener ‘Determined’ and it helps make it sound like some kid in his bedroom finally recording tracks he wrote ten years ago. It’s the best thing on here and its got the same kind of Grandaddy/ Eels sound of just coming so damn easy.

It’s brilliantly lazy, instantly fantastic and like Liam Frost and Sam Isaac it somehow immediately feels like it’s always been on your mp3. While that’s the standout track, the whole album’s consistent. If Cameron Crowe ever made a sequel to Almost Famous set in 2007 (horrible idea, not sure why I’ve even suggested it) he’d be sure to use an A.Rex track.

The title track, ‘Old Enough’, ‘So Hard’ ‘Still Can’t Accept’ and, geez, pretty much any other tune on here are great but it’s still ‘Determined’
that’s gonna bring you back to listen to this again and again.