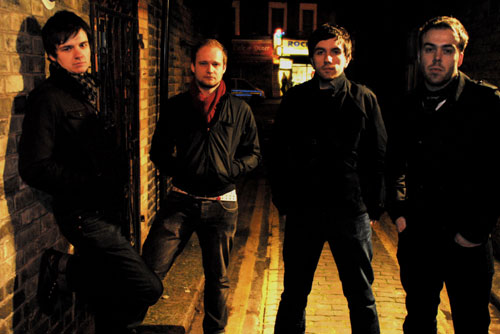 The North East has long been churning out the best new music around with the Futureheads, Maximo Park and Field Music all hitting the mainstream. With their stunning new single ‘Method Acting’ Kubichek! will undoubtedly join them.

Newcastle’s quartet produce the catchiest of indie rockers and ‘Method Acting’ – the fourth single from their critically acclaimed debut album ‘Not Enough Night’ – is no exception. The chorus is so uplifting it leaves you trying to breathe in the soaring guitars and echoing vocals. The angry lyrics are not stuff of genius but they fly along on the wave of the grinding guitar riffs. ‘Method Acting’ is a fine example of Kubichek’s undeniable musical talent. “The harder we work, the more we challenge our songs,” grins Alan. “Making the record, those were some of the moments when I realised how good we were – I’d go to the practice on my own to hear what the other guys had recorded and I’d just end up with the widest grin on my face.’ Having already supported heavyweights The Editors, The Holloways and the Futureheads this euphoric single is good enough to catapult them in to the arenas in their own right to do battle on a bigger stage.

‘Method Acting’ is in the shops now in a special edition 7″ and on digital download.

Kubickek! Have three remaining dates to play in their headline UK tour supported by Battle: