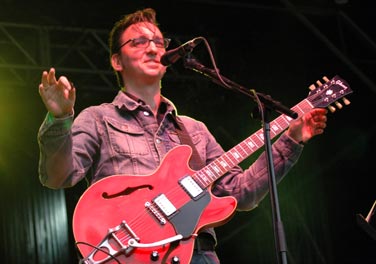 “Oh tonight, oh tonight, I got it really bad.” By the end of the concert – this was no gig; this was a performance, like stepping back in time – we all had it real bad. The audience left enshrouded in happiness from seeing something truly special; Hawley departed gushing about the greatest crowd he’d ever had the pleasure to play for. “It sure beats Scunthorpe working men’s club” was Hawley’s way of summing up how far he’s come and how quickly from hard grafting solo artist to king crooner. He can’t believe it, but we can. As we sauntered home everyone felt that ‘Tonight the Streets Are Our’s’.

Hawley has enlisted Kate Walsh and her stunning voice as his support. The Roundhouse has been restored to something magical; the perfect setting and rolling acoustics for Hawley. Sadly for Kate the venue’s shape traps noise a little too well and the chatting masses at the bars and in the back created a rumble, which drowned out Walsh’s understated tunes. She stands delicate but confident, centre stage with only an acoustic guitar for company and her enchanting voice can fill a space just as affectingly as any. Only it needs quiet to be appreciated. Her set at the Secret Garden Party was beautiful as people stood in silence caught in her moment. She was still able win over a heavy crowd of listeners and will do throughout the tour. Her debut album ‘Tim’s House’ made number one in the itunes chart when released digitally and when the CD is released on September 17 she has the talent and inclusive voice to storm the real chart. It all depends on whether she can find that one song to catch the public’s ear. She may have it too in set closer ‘Your Song’

Not a note of Hawley’s set was missed though. A mix of ‘Coles Corner’ and ‘Lady’s Bridge’ created a near classic night. The accusation is that it all becomes slightly samey and at times it is. Not boredom; you could stay lost in these tunes all night, just that the brilliant songs are so perfect that slightly lesser songs stand out. Hawley is as talented a song writer as he is in delivering them and drew the crowd back time and again. After a few more albums of this quality a Hawley gig will be something of legend where every song can match up to set highlights such as ‘Coles Corner’ and ‘Valentine’ – a real stunner from the new record. His quiff copying fans would claim he’s already there, and he is in terms of voice and performance. This is of course just nit picking. Hawley is a genius whose ballads and rockabilly twinned with razor sharp wit make him far more interesting than any of the NME darlings. “Are you having fun on the balcony? I have to tell you it is 27 years to the day that it last collapsed!”

As the dappled lights sparkled and the audience were engulfed in Hawley’s deep, velvety lyrics it was as though we were in Vegas being regaled by the rat pack. But then Hawley is Sheffield’s Sinatra. At first on hearing such a unique voice and retro show the press may have used the epithet as a joke, now no one’s laughing. His records and live performance could well propel him to that level. Hawley’s latest ‘Lady’s Bridge’ entered at six in the album charts a feat he thanked the fans for. Not quite there but he is more than happy. You get the feeling money and sales are not his motivation – a night to remember in front of a huge adoring London crowd, a begged encore and a stage to regale his lovelorn odes to his beloved Sheffield certainly are.