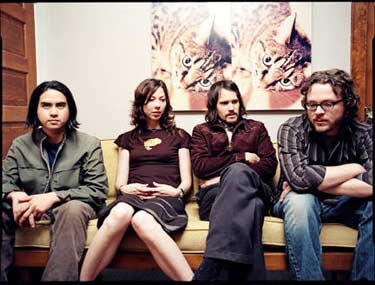 Cross their palms with silver and they will show you the future…of California wooze rock. The Silversun Pickups are working hard to spread the word outside their native California. They hit Liverpool tonight as part of a 10 date UK tour before heading to mainland Europe and Australia, and their street team (“Street team SSPU hoh!”) have set up clubnights across the country playing music from their first full length album ‘Carnavas’.

I walk into the Barfly with some preconceptions of the band; knowing they were from LA, played dreamy melancholic wall of sound rock, and had built up a local fan base supporting the likes of Black Rebel Motorcycle Club and Dead Meadow, I was prepared for some moody navel gazing…which I like as much as the next guy, and he likes it. Sure enough, as we wait for the band to come on, the trademark shoegaze blue backlighting is turned on and smoke seeps from behind us and forward on to the stage, nice touch, but I become wary that there will be too much posing and not enough playing. There’s room for moodiness but you have to able to deliver when it comes to the crunch. The Morning After Girls shouting at us to ‘shut the f**k up’ from this very stage comes to mind, they know nothing of the crunch.

All fears are allayed though, SSPU’s are, believe it or not, a fun band. They show real enjoyment in what they do. A sense of an early Pixie’s dynamic comes to mind (run with it…). There’s the rock steady rhythm section, Christopher Guanlao is a powerhouse of a drummer who windmills his way through the whole set, Jenny Agutter-alike Nikki Monninger on bass smiles at us sweetly, playing the Deal to front man Brian Aubert’s Black – schreeching and snarling with the best of them. Joey Santiago’s guitar wizardry is replaced by Joseph Lester’s keyboard alchemy, leaving audiences puzzled as to where ‘that’ sound came from. They open with latest single Lazy Eye which is very reminiscent of early Placebo, an updated Teenage Angst, with bittersweet muted guitars and hormonal longing vocals. Highlights are ‘Well Thought Out Twinkles’, ‘Little Lover’s So Polite’ and, as the set draws to a close, ‘Future Foe Scenarios’ which the crowd loves and excitedly jumps about launching a shower of liquid into the air and down on to our heads, without even worrying exactly what it is. And the moral of the story is, if a group of shy looking West Coasters come knocking on your door trying to sell you heather or maybe just a night of entertainment, take a chance you might like it. Anyway, it’s bad luck to refuse right?