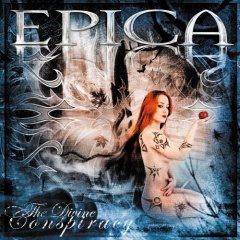 In a scene groaning under the weight of its own black cloak Epica need to produce something special in order to place their own dark flag.

This type of symphonic metal needs to be executed on all levels in order to fully succeed. A large portion of bands in this vein come off as two bands compromising in order to sound different-a metal band hooking up with a female vocalist with an operatic bent in order to create a hybrid and forming an uneasy truce.

The entire album centres around a sprawling movement ‘The embrace smothers’ and in opening up a large idea Epica show the heights they can obtain and the pitfalls that can result.

‘The divine conspiracy’ is made with care, but Epica get lost on the way round the songs and lose impact, more intimate moments would give the record a balance as the heavier male vocals all to often sound forced and unconvincing, which is unfortunate as there are good performances like ‘Death of a dream’. At times the album is achingly beautiful, voices pulling and stroking the edges of your emotions with ‘Safeguard to paradise’ personifying this.
The ‘One’ at the opera sound of ‘Fool’s damnation’ strikes a balance hinted at in previous songs and never attained in later ones, but such is it’s strength and the flow into ‘Beyond belief’ it’s clear Epica can bring their musical visions to bear.

Every grand story or rollercoaster ride has to have that tension and release to be truly effective, and this is something Epica only sporadically pull off.

Epica desperately want you to look into their black heart, but if you look at the wrong time you’ll simply see a black void. ‘The divine conspiracy’ is exactly what you would expect it to be, furious drumming with guitars accenting the keyboard parts, layered over with female vocals interdispersed with a male voice.

At times there are interesting moments and within its chosen circle it deserves to do very well, but the more it moves into the broader metal spectrum it will suffer from a lack of variety and challenging ideas.