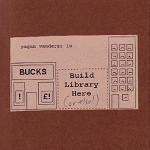 Pagan Wanderer Lu is one of those single-songwriters you don’t really know what to expect from, and a fine example of why pigeonholing is by and large a pointless endeavour. His ‘Build Library Here (or else!)’ LP coasts to extremes; from vocally lead folky offerings of ‘The ending makes what came before a story’ to the smacking lo-fi bleeps of ‘Harp & Chainsaw’ which are only a shade shy of chip rock.

Unlike many a singer-songwriters, PWL doesn’t fall into the trap of being too vocally dominant. While his lyrics are thoughtful and serious, there’s a skilful interweaving of song and synth here that means you can absorb the poignancy of the lyrics or simply let the tune drift through you depending on your mood. And though this LP is indeed a re-release from 2005 off the back of his hugely successful ‘The Independent Scrutineer’ EP, those lyrics, waxing on everything from house prices to Christianity, are still just as poignant as when he first penned them.