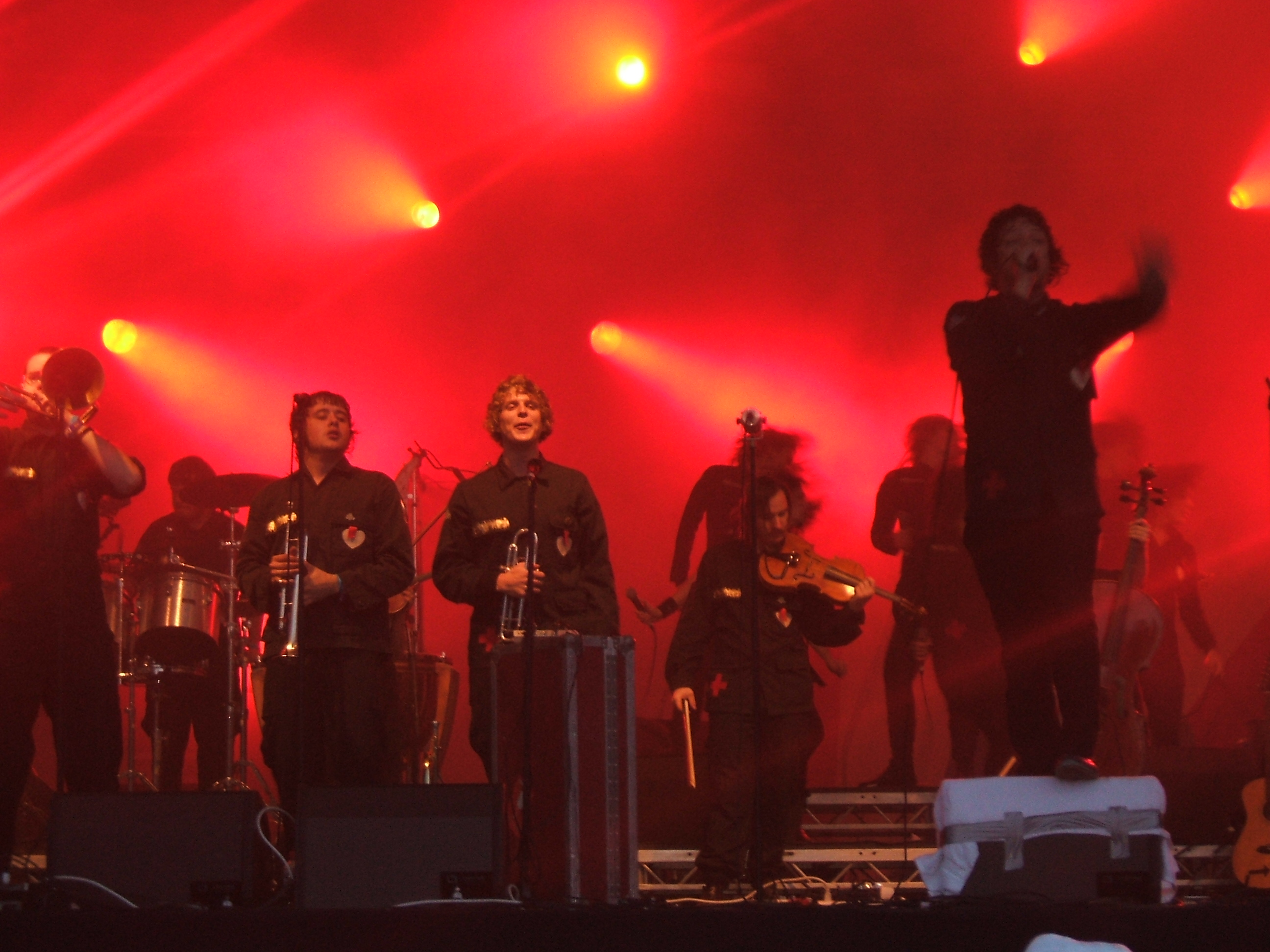 T in the Park should be scared. Scotland finally has a worthy (Loch) monster to challenge it; while England is flushed full of festivals, many of which bit the dust this summer due to overkill and low ticket sales, there is more than enough space for this spectacular newbie. This was Connect Festival’s first year and they pretty much sold out their 20,000 capacity. But if you have the most beautiful location and the line-up of the summer, people are going to flock.

This was a connoisseur’s weekend of the best alternative music trussed together to perfection with the biggest headliners. The busses winded around loch and mountain, into black cloud and rain, which was persistent but not important for the whole weekend. The few breaks in cloud had people joyous. The music was too good for anything to ruin it. So a festival on Loch Fyne in the grounds of Inverary Castle, surrounded by green hillocks and full of the friendliest folk, even we the English (boo!) were accosted and befriended by every passer.

The fact we made it to see the madly brilliant CSS first up only raised sprits higher. This weekend was full of the most uplifting and energetic bands. Lovefoxx led her girls and man through their best, dressed in her usual sequined boiler suit she jumped, dove and then lay exhausted after finale ‘Let’s make love….’ Then Jarvis Cocker followed up with geek aerobics and the crowd followed. Who would have thought Mr Skinny would make such a great Mr Motivator?! His tunes are good but ‘Fat Children’ is no ‘Common People.’ The Go Team! are the real deal when it comes to dancing. They would win any dance off here; even Lovefoxx would be defeated versus the Go’s aptly named mega frontlady Ninja. And the tunes are perfect festival fodder; you can’t help but move to their frenzied beat. They have some talent as well – Mercury nomination n all. Super Furry Animals ‘clashed’ with Beastie Boys, but it was an easy choice to see Gruff Rhys. Another mad genius with classics packed in to the slot. If you haven’t moshed to ‘The Man Don’t Give a Fuck…’ you haven’t lived.

1990’s were the worst of the three days, but they were first up on the Saturday. Things went to ridiculously high levels thereafter. The Fire Engines – one of many Scottish bands given a deserved revival at Connect – gave us some jerky pop-punk good stuff. Peter Perrett and the Only Ones slid on to stage looking much older than their years. Perrett looks at deaths door and is so destroyed by drugs it was hard to watch the man. Fortunately he and his brothers are so talented that they played one of the shows of the weekend displaying their prowess with instrument and Perrett with his voice – the most unique of any frontman. Think Pete Doherty on helium. ‘Another Girl, Another Planet’ is still brilliance despite Vodafone.

And so to the best band in the world – Craig Finn’s The Hold Steady. They pulled a ridiculously small crowd, but it just made us fanatics feel even smugger that our secret is safe for a while longer. Finn is such an unlikely front man but just has so much passion for his songs, and why not when the lyrics and arrangements are as good as theirs. ‘Chips Ahoy’, ‘Your Little Hoodrat Friend’ and to finish ‘Southtown Girls’, highlights from their latest two albums, but there really is no filler especially when they only got half an hour to play. You can’t stay mad at the organisers though when they follow that with the simply stunning Rilo Kiley – both their gleaming bitter sweet country pop and Jenny Lewis’ hot pants and never-ending legs. You are too hot. Having been pretty damn excited about seeing Scotland’s finest Teenage Fanclub, who write sunshine pop with the best hooks from here to the Hold Steady, it was a big disappointment to see the dullest of sets and band. Johnny Marr’s Modest Mouse revived spirits along with another Connect masterstroke Kopperburg pear cider, like a pint of sweets! It was so crammed at the second stage you could barely jump for joy during ‘Float On’. And then the only truly head spinning clash of the weekend. Having seen Echo and the Bunnymen recently Primal Scream got the nod and lived up to their homeland’s expectations with an encore to end all. ‘Come Together’ and ‘Movin’ On Up’…excessively good.

On a mud riddled Sunday the crowds dragged their wellies between stages to catch some of the most unique and special performers around. Patrick Wolf is super talented, switching instruments for each beautiful song. His voice, lyrics and music can enchant even the most hardened listener, who may have found his crazy camp self a bit hard to stomach so early. ‘Magic Position’ may have been the song of all songs here. And then we discovered Seasick Steve, a man to treasure. He left near in tears as he got the best reception of any band here; the crowd just grew and grew as Seasick regaled tales of leaving home at 13, living rough, buying the “crapped out piece of shit guitar I’m playing…it’s got three strings…FUCK!” But as Seasick would say “It’s all gooooood!” His slide guitar solos mixed with a drunken – literally, the man was big swigging from a wine bottle much to Scotland’s joy – Tom Waits growl and great lyrics made us fall in love with the stumbling hobo. There was never ending applause and every person appreciated his effort and pure talent as musician and storyteller. You got the feeling he was expecting one Scot and his dog but left with his ‘Dog House Blues’ never to be small time again. Newton Faulkner was next and wasn’t a patch. This dreadlocked imitator of the already dismal music of Jack Johnson and the like has found himself at number 1 in the album chart. Ridiculous; his set was full of sickly jokes and patter with the crowd and Baywatch covers don’t cut it here. Tilly and the Wall didn’t hit the heights either. They came full of their boundless energy but the crowd didn’t get in to the difficult listeners. They have talent and much originality, three beautifully different girls tap dancing and hitting the high notes, but it just didn’t come off too good; a bit less neediness and quirkiness and they could be great.

Polyphonic Spree (pictured) won all our hearts. Now these are crazier cats than all others. A huge red banner hid the stage before a heart was cut and then banner to reveal the twenty-strong army. Live they make much more sense than on record. The huge orchestra twinned with his energy and passion filled us with unrivalled bliss. Tim Delaughter leads his followers – both band and audience – as a conductor cum preacher. We were almost trying to breathe in the euphoria. Halfway through they left one by one in their black uniforms, remerging in the old white gowns. It’s some spectacle to behold and a dangerous thing this near cult! They get to you and you can’t stop em, affecting us further with ‘Soldier Girl’ and other Spree sing-along songs before bringing out their clincher – their quite brilliant Nirvana cover from latest album ‘The Fragile Army’. It is like nothing you’ve ever heard and got the whole crowd jumping. Having planned to leave the spree to see Bjork many like us simply couldn’t do it; brainwashed to a tee but more than happy. The hour of the little pixie woman’s mammoth set we did see simply couldn’t live up to Tim. Her big electronics and lasers and stunning voice are truly special but from such a distance didn’t quite do it. Pulling shapes in the silent disco did! Best band? God damn too hard, leave it to Seasick to say they were (almost) “all gooooood”

Get a ticket now for 2008 – how they can top this heaven only knows – you simply cannot miss Connect; it rains and pisses all over T in the Park. Follow this link to get a reduced frozen 2007 early bird ticket NOW: [link]