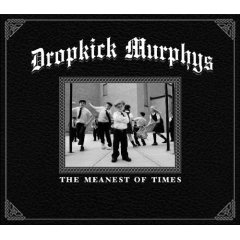 Dropkick Murphys – The Meanest of Times

Picture the scene. It’s 17 minutes to midnight on New Year’s Eve. All your other lofty plans for the evening have failed by quite a margin, leaving you and your mates marooned in the freezing cold, just minutes before the celebration is supposed to begin. You should be in some amazing club with women flowing like water but, typically, your ‘bigshot’ mate has let you down, citing a ‘guestlist discrepancy.’ Arsehole.

In the absence of any alternative you and your mates head for the relative sanctuary of the nearest O’Neills franchise. It’s cheapish, it’s free in and, being everyone’s last choice for New Year’s Eve, it’s quite easy to get to the bar.

Whilst your mates are clearly trying to make the most of it, you can tell that each is taking turns to have a moment of depressed contemplation as to how their life got so shit that they have ended up at O’Neills on New Year’s Eve. In a gesture of defiance at the spiralling misery amongst the group, you decide to spend a large chunk of your budget on the ‘near fatal’ drink that was being advertised outside the pub. You buy two of these concoctions for each member of the group and hastily call not one, but two toasts so that the 6 shots of booze will have maximum effect on its recipients.

As the blood alcohol levels rise swiftly, The Dropkick Murphy’s come on the soundsystem and you know that New Year is near because noone would play this music unless they wanted to promote bedlam during a festive period. Pogue-esque with it’s inebriated sounding vocals and slightly unnerving Gaelic instrumentation, the Murphy’s immediately inspire you to get on the ‘dance floor’ (an area of horrendously sticky flooring where the restaurant usually lives) with all your mates and form a sort of ‘dance-huddle’ that to’s and fro’s until a debilitating injury is inflicted upon the most rowdy of the group. But despite the subsequent trip to casualty, you thank the Dropkick Murphy’s for lightening the mood and making this a forgettable New Year’s Eve to remember.