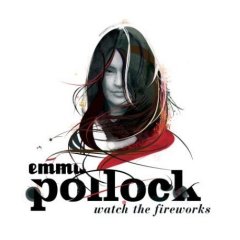 After initially teaching herself guitar from New Order bass lines and going on to spend a decade as a Chemikal Underground Records founding Delgado, Emma Pollock (EP) has now recorded her debut solo album ‘Watch the Fireworks’. Released on the seventeenth of September on the 4AD record label, a seemingly perfect choice given the sound and mood of what EP calls her intelligent yet melancholic pop LP; will this be the start of something special?

Well, throughout the album, we hear a vocal comparable to Nina Persson of Cardigans fame, with Epps individual strength and reluctance adding to its charm in equal measure. EPs voice isn’t anything we haven’t heard before and has definitely found a suitable home at 4AD, host to a number of similar artists like your Tanya Donnellys or Kristin Hershs. There’s even a hint of Meredith Brooks to be found! Guess you can’t have everything!

The album itself casually summons and discards the spirits of The Concretes, Jeff Buckley, Dodgy, Coldplay and Radiohead, as it plays through a selection of piano perked and sentiment fuelled songs. There’s an underpinning sensibility which has its bedraggled roots firmly set in the ‘Downtown’ (Clark) style pop of the 60s. A restrained vitality can be heard pleading for its freedom, away from the more lax lead and sporadically ethereal backing vocals.

No real epic subject matter grabs your attention by the scruff of the neck, though there are some moments that illustrate EPS ‘take no shit’ side, occasionally singing with the scary heart of a woman scorn! The clever wordsmithery is engaging however and does what it can to take a hold on your thoughts. A highlight is track three, ‘Paper & Glue’ which effortlessly drifts from its opening, ‘Hallelujah’ (Cohen, Cale, Buckley…not Happy Mondays!) sentiment before ambling down its own humbly yet beautifully paved path.

Releasing two singles from the album, ‘Acid Test’ and my favourite track ‘Adrenaline’ will do EP no harm at all, given her as yet, unknown status. But unlike most of the 4AD clientele who enjoy success in an understated way, EP just might miss the spotlight she and her Delgado counterparts had come to command if she’s relying on her solo career and the perfectly fine yet somewhat lacking sounds to come from it. Undoubtedly a career to watch because she can surely only go from strength to strength. We’ll just have to be patient whilst she combines the great composition skills displayed here with the previously proven song writing skills that’s she’s maybe become a little distracted from.