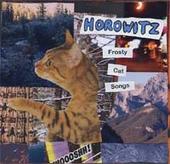 After seeing Horowitz support the fantastic Deirdre’s who were supporting the fantastic Bearsuit, I thought …fantastic and cunningly acquired a copy of their CD ‘Frosty Cat Songs’. What a rollercoaster ride of a listen it turned out to be!

It’s scratchy and partly amateur recordings reminded me a lot of some Stone Roses demos with Elephant Stone being, for some reason I can’t quite put my finger on, a common point of reference.

Continuing with a carefree simplicity that has only been touched upon previously by Grandaddy and maybe their criminally overlooked and sadly Jason Lytleless offshoot band All Smiles. Gentle compositional tracks that frequently interrupted the sometimes nauseating and drone dominant tracks were not only welcome, but were, for me at least, highlights of an LP with 14 inconsistently enjoyable tracks to boast of.

Some great songs were let down by their crappy choruses whilst others were just a pleasure to behear. Amidst the crashing sonic tides alive with feedback and interference, a voice can be heard. Just! A little voice sharing what could be tales of terrible tragedy or heart-warming mush. I suppose not knowing either way cancels the problem out, but if we could hear it…if… only if. Not to worry too much though ‘cause Horowitz have got a splendid sense of style and charisma that will surely do nothing but get some of the recognition they deserve.

Lacking in diversity throughout with both its vocals and song writing, it came as a surprise find myself going back again and again, to subject myself to its strange pulling power. Bizarre! What spell has this monster cast? Sounding like The Strokes had sniffed glue throughout their adolescence and gone on to cover the career of Sonic Youth can be no bad thing, right? You decide.

If you don’t dig the noisier and less accessible tracks that somehow take away from the deserved Horowitz credit rating, program your player and line up tracks 7,4,2,10,9, and the LP gem 12, for an entirely different and easier listening experience!