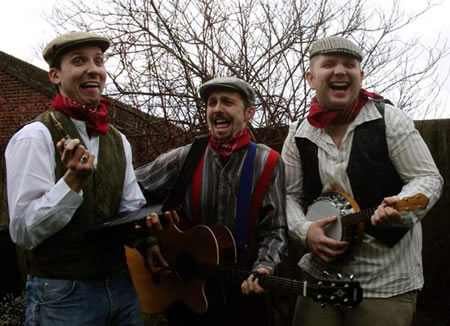 ixed bag of young and old crammed into the Liverpool Barfly to join in with the sing-a-long hilarity brought to town by the Lancashire Hotpots. Celebrating the release of their first single ‘He’s Turned Emo’ the flat capped four played the first sold out show of their tour so far, and it was a cracker!

Front man Bernard Thresher wielding “th’axe of power, wi’ rainbow strap” (his faithful acoustic) engaged the audience at every opportunity with cleverly re-worked adaptations of classic folk songs to give a brilliant social commentary, Lancashire style. Having a pop at everything from Bacardi Breezer drinking Southerners to genetically modified foods, these lads know what they want out of life, and they seemed to strike a chord with the onlooking crowd drawing fits of laughter at every punchline.

Opening with ‘Bitter, Lager, Cider, Ale, Stout’ (“…Designer drinks?! I’d rather drink nowt!”), the working class humour was relentless through side splitters such as ‘Chippy tea’ (“It’s Friday night, I’ within me right… I want a Chippy Tea!”), ‘Shopmobility Scooter’, and finishing on ‘The Bang Bang Thumpy Mega Mix’, a compilation of modern dance classics, donned in willies and given a flat-cap featuring the likes of Groove Armada’s “I see thee flower, shakin’ your bum” and Eric Prydz’s “call on thee”. The biggest cheer of the night followed the introduction the soon to be released single, dedicated to “Them horrible little bastards” (Bernard’s words, not mine!). Yes, He’s turned Emo look set to be a comedy classic in the making, providing the type of Grandad rant we all love to hear.

For the set in their way farmer boys the funny nature of modern England can be a confusing thing, I look forward to them coming back, hopefully with a load more gripes, and a load more laughs.