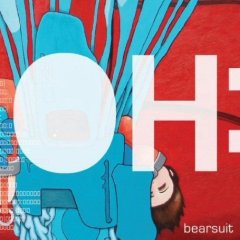 September 20th sees the releases of Bearsuits ‘OH:IO’ album, a dazzling array of sparkly, shouty songs that are capable of both surprising and scaring any unsuspecting listeners out there! Hell, even the prepared amongst you might even find yourself mesmerised! Touching upon all too infrequently covered subjects that range from dinosaur lust to the blood lust of infantile gangs, this album’s got it all!

Sounding like the grown up lovechild of an illicit affair between The Pixies and the Boo Radleys (poor Kim and Kelly) now covering the hits of Whale, Salad and the Boredoms to make a living, Bearsuit do confuse, conflict and yet somehow charm throughout this collection of twelve, half hour filling tracks! And because of its short sweet self, I’m going to briefly comment on each track. Just for you!

Kicking in with the Battle Royalesque ‘Jupiter Force’ introducing us to Bearsuits trademark multi layered vocals and chaotic delivery of their astonishing array of instrumentation that includes cornets, bells and even a Theremin, we must brace ourselves for their onslaught

One of their many standout tracks, the previously released single ‘Steven Fucking Spielberg’ echoes Salads ‘Kent’ with its similar drum filled intro. An innocent vocal reminiscent of Velvet Undergrounds Moe Tucker accompanies the piercing string section that boasts a refraining chorus opening ‘a wooden zeppelin will take us to the sun’ lyric. Sweet! The strongest Bearsuit track and for me that outshines its more direct LP predecessor, their latest cleverly titled single ‘More soul than Wigan Casino’, despite it’s greatly trumpet strengthened spine

Only three songs in and its clear that this sonic assault isn’t for everyone! Individual layers of accomplished musicianship overlap each other, composed together to create a manic medley of mayhem that is almost impenetrable and at first glance could all too easily be mistook as inaccessible and to a certain degree, alienating. But hang in there all the open minded yet doubtful Thomas’s amongst you, for there are many treats in store! And if you’re not called Thomas, cool, hang in there too!

Dinosaur Hearts most notable feature is its PJ Harvey styled vocal contrasting against its urgent bursts of timid ahhhing and ‘Keep it together, somehow’ rattles through your ear space leaving little effect or evidence in its album filling wake.

Another undeniably superb track that goes against the Bearsuit grain follows. A real breath of fresh air can be found within ‘Look a Beached Coral Faced Crow with Jewels for Eyes’. Like Belle and Sebastian covering some laid back ‘By the River’ era Groove Armada track with a maturity and calm composure all its own.

And then we’re back to basics with ‘Foxy Boxer’ and its topless lady boxing inspired self. Opening with ‘Wave your hands in the air, like you just don’t care’. Yes it’s a safe lyric to go with, but it’s both effective and fun, so why not! Spurred on its quirky way with interjectory and multi instrument derived freakiness and solid drum blasts to serve as safety net, it reaches culmination, mid-point with a great lyric ‘She’s got hips like mahogany’, before travelling its earlier trodden path of power pop. And don’t forget… ‘Don’t underestimate the power of a punch from a Foxy Boxer!

‘The love will never find you’ again sounds like Belle and Sebastian, only this time they’ve been slipped a bluey or are being played at 45 instead of 33! No epic chorus or key lyrics to entice your close inspection though. Aside from the vocal here, ‘Hark! The Feral Children’ sounds like a Breeders and Jane’s Addiction out takes amalgamation. ‘Shh get out’ sounds like the entire cast of Noddy on a bad trip! And it works well but the faint hearted amongst you wont want to hear the songs ending, poor Tessie bear!

Penultimate track ’Mission IO must not fail’ summons images of spacecraft launch and sneaks in through the delicate sounds of thunder to take us onto brass filled pastures and horizons dotted with some lacklustre vocals that escalate into an anticlimactic choral effort that could’ve continued alone to bring a sublime close to the song. Oh well! Here we are then, track twelve, ‘Stay Alive’, the LPs all too short lived piano driven finale. And then, like Keyser Soze, it was gone!

OH:IO is, it could be said, monotonous in its construct as it is inaudible in its composure. But with so much to take in and to dissect for the analyst in us all, it’s a real delight. Each aspect of its being is, in its own right, tightly performed and delivered. Any casual listeners out there might be put off, but then they’ve always got chart music haven’t they. If eccentrically diverse and refreshingly alarming music sounds like your poison, dip on in!