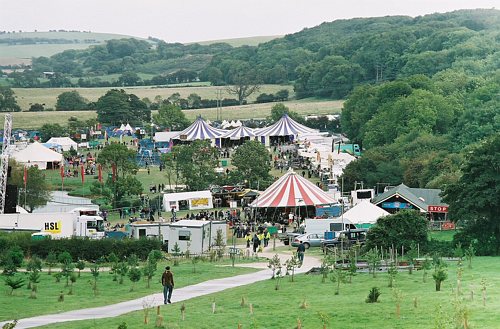 The festival Gods point their rods of rock and roll on the Isle of Wight for this, the last great festival of the summer.

Chemical Brothers headlined day one of Bestival and as far as anyone can remember it was good, oh it as VERY good…apparently. Back-to-back classics from as far back as Exit Planet Dust to latest album We Are The Night. No sign of Tom and Ed from 300 feet away but the atmosphere carried for miles as an all-out outdoor party ensued.

The legendary Beastie Boys were the headliners of day two and their two sets of equally sonic proportions were possibly the highlight of the entire weekend. The build-up on Saturday came from a Zane Lowe DJ set and on Sunday they were preceded by DJ Yoda and followed by UK beatbox champion Beardyman who was dressed appropriately in a gorilla suit. Both Beastie Boys sets were closed with the classic anthem Sabotage to which the crowd erupted more than at any time during the weekend.

Primal Scream hit off the final night of music and drained every last bit of energy from the Bestival crowd. Their set included all the classics, Swastika Eyes, movin’ on, and proved rock n roll isn’t dead after all. Suggs put it perfectly before he was dragged off stage by security; “Rolling Stones! Do me a flavour! Primal scream are the best rock ‘n’ roll band on the planet.”

Here is a list of everyone else Glasswerk had the joy of witnessing over the weekend:

Planning To Rock, despite technical difficulties managed to get a powerful show underway and showed us just what art rock is all about.
Erol Alkin proves without doubt, flat out, hands down, that E.R.O.L. keeps kids dancing…all night long.
Cuban Brothers were musically brilliant and brought a good wholesome party vibe to the main stage, the only stage big enough to hold an act of this size.
We Don’t Play are possibly Bristol’s finest exporters of cut beat funk on the ones and twos, the groovemeisters rocked the Come Dancing ‘club in a festival’ on both Saturday and Sunday nights.
Foals also played two sets in the Vice and BBC tents, each with equal amounts of energy, skill and craft.
Bonde Do Role showcased their typically madcap Brazilian bonkers music, sweating for the cause.
Robyn‘s electro pop set began with a planet on her head, and then once she revelaed it really was her we were treated to many of the top songs from her amazing debut album.
Luke Vibert dropped some ambient shit in the low hanging Bollywood tent and everyone just danced despite the heat undercover.
Jamie Woon‘s romantic acoustic sweetness was a chillout highlight of the weekend as everyone relaxed and enjoyed the talent of the solo performer.
Kid Carpet played the highly irritating game boy pop he does like no other and brought smiles to faces in the rammed House of Bamboo.
Lucky Elephant played in the delightful bandstand, a quintessential setting for a beautiful band, lit by fairylights and a warm glow of human joy.
Francois K, unbelievably had the stamina to go until 4am in the big top.
Soul II Soul with an array of classic hits warmed up for the Beastie Boys on Saturday night with a nostalgic feel and good dance along.
Madness were the surprise guests of the weekend, Suggs especially enjoying himself, getting drunk on stage with Primal Scream and performing in the Loose Tea tent as well as the fantastic performance from Madness on the main stage on Saturday.
The Knights of 100 Ukuleles were a complete novelty act thrown in with obviously a lot of preparation and organization going into their rendition of Ring of Fire before they were off in a marching procession through the festival grounds.
The Wombats blew the BVC introducing tent away with a jolly performance on Sunday morning.
Remi Nicole with her teenage indie pop troubles was a lotta lotta cool for the big top.
Roisin Murphy is a very sexy woman but most of her songs are better reminded of the classic days of Moloko.
Gossip’s Beth Ditto practically stole the show away from every act with their explosive set, the voice, the look the style. Yu can go as far as to say there is no more rock n roll act on the planet at the this moment. Sure Bobby Gillespie would agree.
Horace Andy produced some fine largely improvised reggae and with him he had one of the smartest drummers at the festival.
Dan le Sac vs Scroobius Pip appeared to be little more than a DJ and a cockney man shouting at people but we all love them both so didn’t mind too much, he’s a witty guy that Pip.

The only question is as everyone continues to recover from the three day party is can it be this good next year or will the increasing attention and radio/TV coverage mean more and more common folk will be attracted to Bestival? This is by no means an elitist festival utopia but its not far off.

We’ll just have to wait and see but if you are ready to book now, tickets are already on sale for Bestival 2008 from here [link] .
It’s a long way off until next year but if you were there this year the memories will stay with you forever.