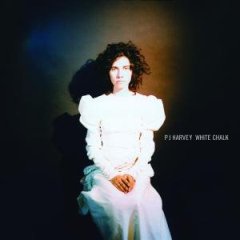 PJ Harvey is back at last with her eight studio album‘White Chalk’ and the follow up to 2004’s ‘Uh Huh Her’.

‘White Chalk’ is tender and stripped down, there’s none of the rock stance of songs like ‘No Girl So Sweet’ or ‘Sheela-Na-Gig’. The guitars are replaced with the piano giving the album a haunting beauty and after a couple of listens it becomes addictive. ‘The Piano’ for me is definitely a stand out track that instantly stirs up some kind of aching emotion. It’s a darker album and unlike other PJ Harvey albums there’s no mixture of some dirty louder tracks and more mellow ones -it’s all mellow. It’s the complete opposite of ‘Stories From The City, Stories From The Sea’, but isn’t that the sign of a true artist someone who can experiment with the music and still make a great album that’s not in their comfort zone. It could be a difficult album for some to listen to but its well worth it.