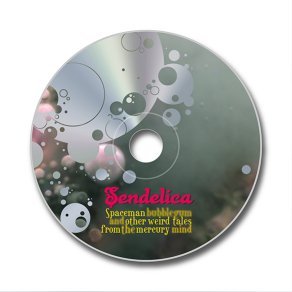 SENDELICA – Spaceman Bubblegum and Other Weird Tales From the Mercury Mind

More psych-out rock from the south of Wales courtesy of Sendelica with their second album fantastically entitled ‘Spaceman Bubblegum and Other Weird Tales From the Mercury Mind’ For some people the seventies was a decade that occurred over thirty years ago, but not so for Sendelica as the pulsating sounds of Floyd et al are alive and well in the South Wales valleys.

Sendelica make no bones about being obsessed with a certain era of music and they wear their musical passions on their sleeves for all to see. This sound driven epic kicks off with ‘Sunfazed’, a guitar driven sound-scape that instantly transports you to a world of swirling colures and non stop freaky dancing that only girls in mini skirt can undertake. The entire experience is one of boho living with multi coloured bean bags all filled with Charley Croker’s bevy of international beauties just waiting for a corrupting influence to come along. The fact that the album has been released by a Russian record label and is available in Eastern Europe just adds that fantastic edge of cold war 70’s intrigue to the already overflowing pie of retro heaven.

Sendelica produce a sound that simply isn’t the style of the moment but thankfully it has heart and tones of it, something else that really isn’t in vogue today. For all those that struggle in imagining such music then you need to go and rent a copy of the 70’s classic film More, sit back and bathe in the sounds. If anybody was alive today that had the balls to make such a movie they could safely turn to Sendelica to produce just such a space opera sound as would be required. This album is very much for those who can appreciate an entire sonic concept and don’t require a re-assuring hit single every three minutes. Strongly recommended for those sharp enough to appreciate it.