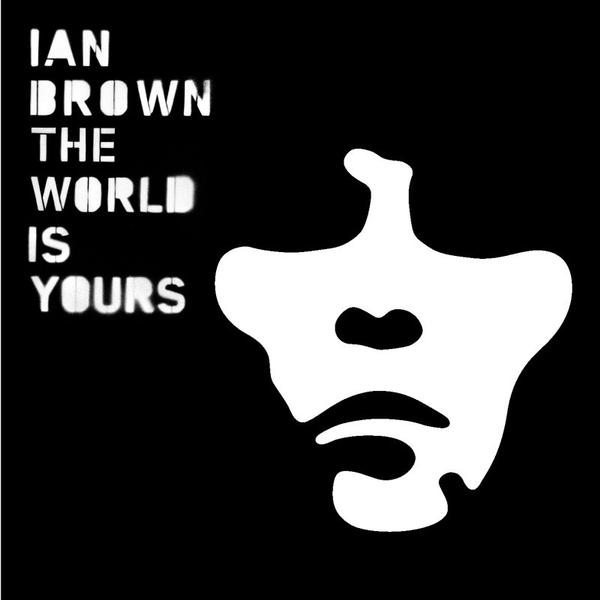 Ian Brown – The World Is Yours

Guess who’s back! On September 24th Ian Brown releases ‘The World is Yours’, a slice of genius to blow away all his previous work…apparently.

It seems that the crazy hazy influences that we heard on his 1998 debut ‘Unfinished Monkey Business’ have been replaced by more grounded sources of input, bringing a depth and maturity to his sound that perfectly accentuates the recent topical seriousness of his songs. So here we find a man transformed, but into what? With Sinead O’Connor, Andy Rourke, Paul Ryder, Steve Jones and Paul Cook all on board, is this to be the epic masterpiece we all knew Ian Brown would one day release upon us?

‘The World is Yours’ kicks in with the title track and its slinky guitar. Smacking of any classic 70s blaxploitation theme, it’s a song about ‘my daddy’ etc. Tipping his hat toward the likes of Marvin Gaye and any other sentiment driven soulman funksters you might care to mention. Unavoidable, lush orchestration adds a Motown feel to a track that expectedly carries a message of positivity and ‘go get ’em tiger’-ism

‘On Track’ follows suit, straying towards more synth’ shaped sands, string arrangements and ultimately, the same attitude from the opener to shift it along.

‘Sister Rose’ sounds like its shaping up for Nat ‘King’ Cole to come and do his thang, before a kick ass guitar interrupts its softly plucked strings. Briefly reminiscent of the late on breakdown of ‘Longsight M13’ from 2004s ‘Solarized’, no harm is done at all as its composition takes on its own direction and vitality.

‘Save us’ with its suppressed percussion and string dominant, beat dropping tendencies offers more of the same stuff. Some epic sense of drama is thrown into the mix with its sweeping orchestration and escalating urgency. This could quite easily been featured on the soundtrack for’ Cleopatra Jones’ (owing for IBs vocal). It’s an anthem for the everyday man trapped in this matrix world of society, finance, injustice, state dependence and warmongery and yadayadayada!

‘The Eternal Flame’ is begging to be sampled. Sounding like a ‘Gangsta’s Paradise / Hard Knock Life’ made at home fan made flipside remix of some sort! Some illiteracy reassures us that Ian Brown is still the same semi-educated Manc we know and love.

‘The Feeding of the 5000’ grabs your attention in the same way ‘F.E.A.R.’ did when that grabbed you by the scruff of the neck. More synth’ and some quickly accessible ‘na na na’-ing welcomes us, after the initial and unavoidable orchestration of course.

‘Street Children (Pity the Child)’ makes you wanna bounce up and down in baggy trousers, with your baseball cap on backwards as you nod your head to the music! Ian Brown doing his bit for the kids and notably doing it with the same strings dominant formula.

‘Some Folks are Hollow’ subtly features Sinead O’Connor on this somewhat unsurprisingly religion themed track. There’s nothing like a good old attack on the oh so rich church and its ill-gotton and sickeningly guarded wealth. That’s not to say you should take to the streets with Molotov’s and matches though.

‘Goodbye to the Broken’s percussion and cascading atmosphere effortlessly drives it along amidst a ‘Keep what ya Got’ resounding construct. Surely an ode to the Stone Roses and John Squire in particularly, with it’s ‘you were all wrapped up in a blizzard, coked up, up to the gizzard’ lyrics. This poignant point of interest for all the Roses faithful to scrutinise closes with no real impact or effect.

‘Me and you forever’ is a menacingly deep yet aloof track. Stabbing strings make a big difference, contrasting effectively against the earlier ethereal approach! An impending sense of foreboding doom reins in the more upbeat and up-tempo instrumentation. How long before UNKLE get their hand son this and diversify it as it’s begging to be, is anyone’s guess, but shout up when they do! What a great drum driven outro too!

‘Illegal Attacks’, the first single also featuring Sinead O’Connor is already growing in notoriety, attracting definitions like ‘controversial’ as it begins its journey into the annals of rock n roll history! There’s such a great balance holding its heartfelt attitude and mournful yet spitefully delivered vocals together, all carried sublimely with the masterful music. Fanfookintastic! See my review of the single (here on Glasswerk) for more analysis!

‘The World is yours (reprise)’ closes the LP with an undiluted portion of yes, you guessed it, strings. Yes they’re rich and definitely pivotal to Ian Brown’s new found and newly forming distinguished dynamics, but come on, you’ve got to draw the line somewhere. This track should’ve been saved for a flipside instead of trying to drive us over the edge.

The 2nd disc that features 8 orchestrations from the 1st disc should perhaps be heard first to allow your system some reprieve with the addition of some clever and god sent lyrics. All hail King Monkey, he’s back and he’s alive and he’s swinging and kicking!