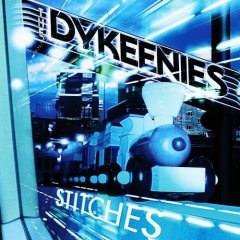 Sometimes you get these bands that are apparently loved by the media; who are picked out of oblivion for Rock n Roll Riot tours; who superstar producers choose to take under their wings (yes Mr-Artic-Monkey’s Jim Abyss we are talking about you); who have ‘good press’ basically. And sometimes, you cannot really understand why.

Unfortunately The Dykeenies are such a band. So-named after a ‘phrase’ in the 80s fantasy film ‘Willow’ (you tell us which phrase, and why this has any prominence over any other because we are a bit lost like?!), you’d presume that they appeal to those old enough to get the ‘in joke’ (as obscure as this might be) but those young enough to read the NME, and claim attendance at their gigs. But to be frank, their popularity is a bit baffling to those of us in that bracket.

The single ‘Stitches’ is alright; It sounds like the closing credits on some dodgy 80s romance film (which some people will like). The lyrics ‘make a wish tonight all the stars are out’- is their raison d’etre we’re sure (and indeed I heart the eighties cringeworthy). It’s an uplifting enough song; a bit wishy washy in places; diluted indie-pop basically which is not always a bad thing. But like Rock n Roll Riot tour mates, The Fratellis and the Horrors, we can’t help thinking it’s going to take one heck of a record to measure up to the ‘hype’, and we’re pretty sure ‘Stitches’ isn’t it.