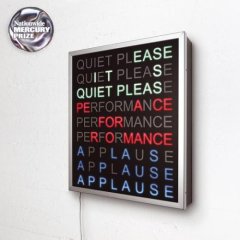 So it’s that time of year again, where the alleged music boffins sit around, choose a selection of hideously famous and decidedly obscure artists and throw a dart at the list to pick the winner.

We all know by now that the Klaxons won (deservedly, in my humble opinion) so obviously they’re on here, with possibly their most overplayed song, Golden Skans. The other big highlights are the other potential deserving winner, Amy Winehouse, with the great track ‘Back To Black’ and the Arctics with the quietly brilliant ‘If You Were There, Beware’. The ‘why the hell are they there?’ corner is covered by Dizzee Rascal, whose new album was the worst one he’s done, and Jamie T, who seemingly does nothing more than shout utter shite over average music (which is apparently what makes you famous these days. Am I bitter? Yes). However, kings of the Somehow We’ve Become Famous tag are the unutterably awful Young Knives, whose success shocks me more than bestiality and Jodie Marsh’s face. Even ‘The Decision’, which is a lot less terrible then their other songs, has something about it that just makes me want to die.

Thankfully, there a few artists on this compilation who you’ve not really heard of, but turn out to be brilliant – which, to me, is what the Mercury Prize is really all about. New Young Pony Club’s ‘The Get Go’ and ‘Lost My Soul’ by Maps are the diamonds in the rough, while the Basquiat Strings bring a whole new dimension to the shortlist with their moody jazz-infused tune ‘Double Dares’. Unfortunately, these kinds of bands are too scarce, and I’ve no doubt next year’s shortlist will be comprised entirely of people like Scouting For Girls and Kate fucking Nash.