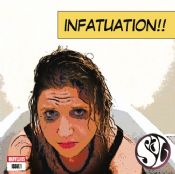 E.P’s are tricky things. They simultaneously encapsulate one idea whilst hinting at possible directions a full-length album would take. Sal achieves the balance on ‘Infatuation!!’ but at the detriment of the most important aspect – the songs.

Infatuation starts and maintains a nice edgy quality throughout the record but in moments like ‘September’ they let themselves down with weak sections placed inaccurately.

The middle section to ‘goodbye’ is juggled and falls completely out of place, meaning that everything wrapped around it suffers. ‘Dreaming’ is neither interesting or different enough to warrant attention-and maybe that’s the problem-you simply want more, more angst ridden, more passion, more heartfelt, simply more.

The E.P. does achieve some success though, the original ideas are intact and there’s definite movement capable in their sound, just not enough of either. When they do break stride on ‘Make It On Her Own’ however it briefly flirts with an anthem and clearly needs to be a single based on its infectious strength.

It’s strange then that there are some extremely passionate lyrics on offer here but Cat seems to deliver them without any real feeling, or worst still appears to be fighting to be above the guitars.

Sal are more than capable of producing an aggressive pop/rock record, you just have to read between the lines. The only trouble being there’s a lot of lines.