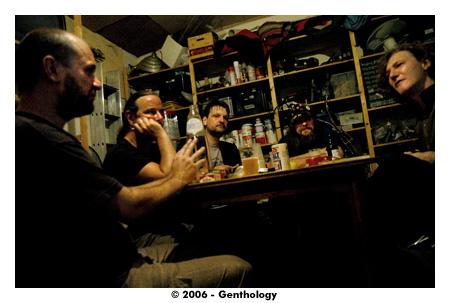 Pox – On Your House

Belgium is not normally considered to be a country producing good bands. However recently there have been a number of good bands producing innovative music from Belgium. Ian Van Dahl, dEUS and SOULWAX/2 Many DJs are just a few examples.

Now a new band from Antwerp has come onto the scene in the hope of adding to the list. This new band called Pox, formed in 2005, regard themselves as being a soul/rock group with a “souped up sound” and have brought out their first album called “On Your House”.

Fans of Athlete and Snow Patrol will enjoy the first track “Waiting ’till You’re Gone” with the same indie rock style and acoustic guitar. The song combines the “minimalistic drumming” with vocals to rival that of Athletes frontman Joel Pott.

The second track “Stay” is very similar to the first track, but is one of the strongest tracks as it is most different from most new music, as the vocals and guitar sound almost out of tune, full of dischords.

The third track “Maybe Someone” brings a new style with an acoustic guitar and a Jack Johnson style snare drum sound played with metal brushes in the background. This sound carries on through the rest of the album until the penultimate track “This Room”, which is reminiscent of “How To Be Dead” by Snow Patrol and the album finishes with a 7 minute track “Leave Me Like A Friend”, which has few lyrics and is mostly instrumental, and leaves you wanting more, and wondering what they will do next.

Unfortunately this is nothing new and there are bands that do the same thing and do it better. Pox haven’t really found their style as the genre changes from each track. “On Your House” was not a bad first attempt, and Pox have a long way to go to challenge top rivals such as Athlete and Snow Patrol and to have as much success as Jack Johnson.