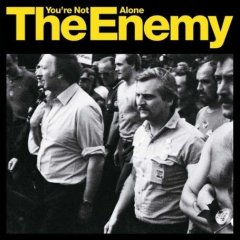 The Enemy – You’re Not Alone

Coventry based ug-rockers The Enemy are one of the new breed of band who speak out about topics, like hating your job or being unemployed, whilst at the same time being hideously rich employed rock stars themselves. There seems to be an incredibly simple formula that groups like Hard-Fi, The Twang and The Enemy have incorporated into their music with their big guitars, gritty subjects and chorus’s fit for the football terraces. You’re not alone speaks to the workers of the Renault factories in Coventry and as you can tell from the chorus telling them they ‘they are not alone.’

A lot of people have really taken bands like The Enemy into their hearts and you can see how this the fifth single from the Enemys debut is almost the same as all the other singles they have released and pretty much exactly the same as the Twangs songs and Hard Fi’ as well. If you like gritty songs, huge guitars and big moronic chorus’s this is the stuff to you.

The Enemy are a band telling the story of the underdogs and though it has been done an awful lot better in the past there is a lot more sincerity in their music than some of the other bands telling similar stories especially when the closest thing they ever come to suffering is what brand of trainers they should buy.