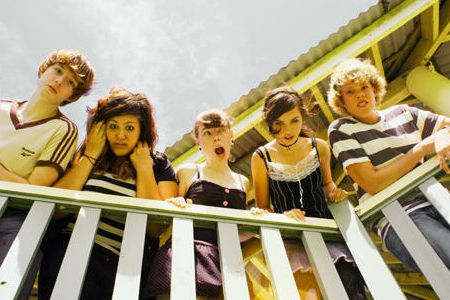 Ah Operator Please, you came, you played, we left happy but there was just something missing from the first live experience of a band so massively hyped. Apart from a group of glow-sticked kids in the corner the whole place was just a bit, well, still.

The band themselves were good to watch though (keyboardist Sarah pressed about two keys every tune and then danced around for the other three minutes like she was watching Daft Punk in Coachella) and Amandah’s becoming a pretty fine front woman.

Opener ‘Get What You Want’ was probably the highlight and ‘Song About Ping Pong’ was the one tune that got the non-glowstick enabled dancing, but there was something missing. It’ll come in time no doubt and Operator Please will almost certainly be as huge as everyone’s saying but right now they just need…something.

Stealing the band of the night tag though was Elle S’appelle, who have
quickly chucked themselves up alongside Hot Club De Paris and goFASTER>> as one of the most exciting Scouse bands around right now. Far better live than on record, Lucy Blakeley stole the gig on keys, the Kate Nash dress helped obviously, but she’s got a presence about her and lord behold the girl can even sing. Like Operator Please they need more gigs and more tunes but
‘Little Flame’ and ‘She Sells Sea Shells’ are sounding good. Like the tour
says they’re ‘Ones to Watch’.