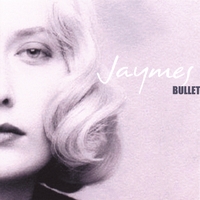 It has been 7 years since Jaymes Bullet’s debut album was released. Back then she was known as ‘Antero’s Bullet’ and the album was called ‘Dead On.’ It received little to no promotion over here in the UK – as with most independent artists, finding the audience is the hard part. But that ten track album is also evidence of the easy work she makes of the music itself. ‘Dead On’ was quite something else – and like any great music, it would be a shame for it not to get noticed.

At least now she has a second effort to help get her noticed again. This time using her name alone on the album cover, this second collection of electronic, soothing tracks is by no means any sort of failure. Lighter in its tones than her first album, Jaymes Bullet presents some very moody, yet seductive, lyrics that entwine themselves in her beautifully orchestrated music.

‘She’ is a great example of just how seductive Jaymes Bullet’s voice AND music can be. There has always been strong themed guitar work in her music that instantly catches. This of course is supported with the right sort of engineered electro beats.

‘Enough of Your Love’ takes a more sinister turn and shows a darker edge to the album, but again retaining every bit of Bullet’s style and appeal. Juxtaposing this is ‘Move With Me’ a very sensuous love affair with a almost fairytale feel to it. It’s a very strong start to the album.

The remainder of the album is fairly sedate and mellow and whilst it never quite peeks as the opening three tracks it delivers a smooth and easy listen. For those lucky enough to be familiar with her previous work it was certainly worth the wait. It’s just a real shame it took this long for a second album to appear and fans old and new must hope its not as long until the next album.