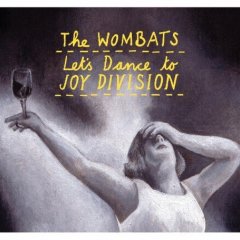 Those Wombats. Those frigging Wombats. ‘Let’s Dance to Joy Division’ is a turd of a single, it’s a shit. Why a turd you may be inclined to ask? A pleasant enough hook, quirky lyrics and subject matter that anyone who’s woken up with half the crap from the sweaty dancefloor on the bottom of their jeans and a stiff neck from the indie bopping they were doing nine hours previous can easily relate to. So simply told I can almost taste the shit warm beer I’ve doused everyone around me with whilst we all gushed about how love would indeed tear us apart, again. Why a shit?

Well… I enjoyed it. I sat and listened, and I’ll do it again no doubt, but it’s annoying you see. It isn’t a creation of any great skill, not massively interesting, not very important and it’ll probably be irrelevant given a couple of months. A turd, and a good one at that, and whilst I’m more unmoved than provoked by it I do wish it’d leave me. The thing that irks me about these Wombats, these frigging Wombats is that they keep turning out this shit, this good shit. This shit that won’t flush, because once you’ve heard it, then that’s it, you’re stuck with it. You’re humming; you’re whistling you’re back and forth to the MySpace just to get another fix.
Is this just great pop rock driving me insane… or is this single really a belter of a shit?

Having experienced a greater adrenalin rush and confidence boost than that you’d receive by winning the London Marathon dressed as Chicken Joe from Surfs Up, due to the fact that you are the first unsigned band to sell out the Carling Academy in your home city of Liverpool. Is something that the chirpy trio, The Wombats will never ever forget. It is of little surprise that the good folk of Liverpool took so readily, to a band that grazes in between the lush pop-fuelled musical pastures of Shack and the lyrical eccentricity and vocal playfulness of Half Man Half Biscuit.

It is probably the added combination of a lamenting Travis lag and some prosperous Polyphonic Spree backing that attaches to this strut through music’s past that has widened their appeal, geographically speaking. Mathew Murphy’s friendly and high profile leading pitch provides for a stirring narrative. Something that gives The Wombats another weapon to use in their fight against Lethal Bizzle, to win the main support slot before The Enemy on the forthcoming NME Rock N’ Roll Riot tour.