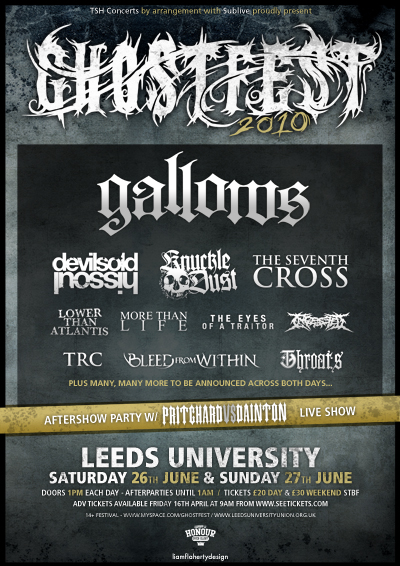 The Gallows – The Junction, Cambridge

Frank Carter must be to English mums as Marilyn Manson is to American Moms. The Gallows front man is tattoo laden, angst ridden and looking for as much danger and destruction as each provincial town can offer. Yet this is an Englishman to be embraced – if you’re brave enough – rather than marginalised; his complete passion and disregard for himself produces the most thrilling live show. Carter has more stage presence than pretty much any other contemporary act and the music lives up to the show’s energy. This is a band to love whether you’re a fan of hardcore punk or think it’s a domain of obsessive teen outcasts. Hours before the Gallows stormed to stage the inked and pierced masses were queuing in the cold to be first to the barriers; true music fans.

Having avoided a roaring hardcore support band -who mirrored the Gallows in noise but without their subtler musical talent or any definable songs – the real show at the Junction was full to burst. Frank Carter is a little ball of manic energy and he simply explodes as the Gallows smashed in to their set. It is a job keeping a track of Carter as he leaps upon sound systems and jumps into the whirling mosh pit, once to sing a track from the lighting booth at the back of the hall. When you do lock on to him it is some spectacle. Astride some set piece he puts everything in to his shouted lyrics full of the foulest language. And yet it sounds almost poetic as the crowd shout back the punk anthems to their heroes. When the wall of sound breaks for a moment Carter recalls a hardcore Mike Skinner or Jamie T. It’s a stretch but there is something there in the Watford twang, the strong regional accent and street lyrics that send this band way past their UK rivals to live up to the hype that has suddenly enveloped them and roar to another level altogether. The Gallows’ sound recalls the Transplants – minus the keyboard. Big crashing, sometime soaring guitars and constant, heavy drumming to move even the most cynical viewer.

“It’s amazing for us to play to so many people. Really it means everything to us. If it wasn’t for you people buying our album I wouldn’t have my Porsche! No seriously it really (pause) got me that Porsche!! This one’s for those of you who’ve supported us from the beginning and haven’t jumped on the hype train!”

The fact they raced through the tracks and didn’t return for a contrived encore only made the night more hard hitting. Gallows are not for the gibbet but if they continue winning over the doubters Frank Carter may just have the nation’s parents scrambling to lock up their children. Nothing could stop these fans though. Frank and his Galls are for real.