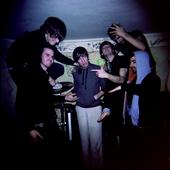 There was a pretty full and hyped up crowd in Cambridge to see Oxford based band Foals. Describing their style as Korean Pop/Minimalist/Afro-beat this group have built a fervent support base of fans up and down the country.

Even knowing what label they choose to wear and having heard samples of their work it was still hard to know what to expect. But this band have a solid skill base to draw on, the drummer and the bass in particular put in stunning performances. It became clear where the minimalism was, taking short runs of notes and focussing on them – using them to build a counter rhythm to the drums – whilst another rhythm interposed itself from the bass aptly showing where the Afro-beat came from. An interesting fusion of styles that worked really well.

There seem to be numerous influences at play here making for a deep and complex performance, constantly surprising and delighting with deft changes in tone and rhythm – they had the crowd bouncing within moments. Even this slightly nervous reviewer was bopping on the sidelines, the mood was infectious and the beat was invasive in a very good way.

This band had the audience eating out of their hands from the off, it seems clear that they are destined for the big time, and indeed are playing support to Bloc Party later on this year at some pretty big venues. This might well be a test for them but they will meet the challenge head on and reap the success they deserve.