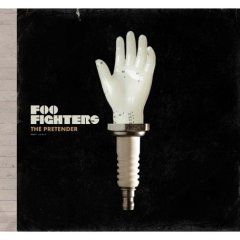 I thought for a second on receiving this CD, that Foo Fighters had taken to Freddie Mercury covers, but hangovers will do that for you.

Once I’d cleared my vision and picked last night’s pizza out of my dishevelled hair, I realised this is as far from Queen as you can get. In fact the adrenalin gushes from this track like blood from a severed artery. It makes Queen sound like a cabaret act.

It has all the trademarks of a great Foo Fighters anthem. Uncle Dave’s time with Queens of the Stone Age seems to have been well spent. There are plenty of solid repetitive riffs here to keep even Josh Homme happy.

The opening would seem to back up complaints in some quarters that Foo Fighters have somehow gone limp. It’s a dark, sad chord progression with a bass line Sergeant Pepper’s McCartney might have written.

But when the drums kick in any thoughts of limp go…well, limp themselves!

If the single doesn’t grab you at first, check out the video – it’s powerfully simple (and very wet) stuff.

Trust me, you’ll be itching to get involved in a protest march after hearing this. Riot policemen though will hate the living crap out of this song. Sorry guys!

The question remaining is really; how do Dave and Co keep coming up with belters like this? I say who cares – bring it on!

The only other question is where the hell did I leave my Save the Whale banner?