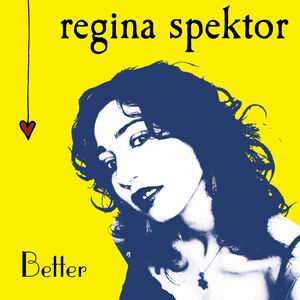 Regina Spektor likes to feel better okay! It’s a recurrent theme in her work, and you can’t argue you with that. I mean really, who wants to feel worse – Messrs Morrissey, Cohen and Sylvian excepted of course.

In my last review of her single; Fidelity, I took a pretty miserable view of her inflections of the word better. And quite rightly so – why would a successful international artist want to imitate a chav?

I’ve compared Spektor to Suzanne Vega before and I’m afraid I haven’t changed my mind. Not that it’s a bad thing you understand. In fact it’s a compliment.

There was a stage in Vega’s career where she came out from behind the long blue jackets and starched long skirts. It was a glimpse of raunchiness brought on by industrial sounding drum machines, and a view of a sexier Suzanne than we’d seen before.

Honestly – the mussed dyed hair and pouting in the 99.9 Fahrenheit Degrees video will torment me until I die. But I will enjoy it.

But even then, I was subconsciously willing her to reveal more of this sultry side.

And she never did return my calls, but that’s besides the point.

The point is Spektor’s produced a ‘nice’ record, with an edge to it that’s frankly pretty bloody good.

Opening with a good old fashioned pounding of the ivories, her voice quickly reigns everything into line and you’re suddenly listening to a quite remarkable songwriter.

Better is what is says on the tin – better than her last single.

If you didn’t get Tori Amos, but wanted something more challenging than Vega, Spektor’s your lady.

Personally I prefer the harder edged, constrained violence of a Kristeen Young track, but as new pop goes, Spektor will, I think, prove very hard to beat.